A Little Patience is a scenario in World of Warcraft: Mists of Pandaria. Lorewalker Cho has provided champions of the Horde the ability to run the scenario in Patch 5.2.

Drive the Horde from the occupied temple of the Red Crane!

The blessed Temple of the Red Crane is the ancestral home of Chi-Ji, the celestial embodiment of hope. From within the temple's ornate halls, the Red Crane wings out to oppose the despair that spread through the murky Krasarang Wilds like a cancer. But, with the recent arrival of Horde occupation forces, the sacred site has become a fortification, and the Crane's servants hostages.

Leaders of the Alliance, foremost among them Varian Wrynn, are divided on how to deal with the problem. To remove the Horde from the temple without needlessly sacrificing Alliance lives, you’ll need to lure them out and take them down with carefully placed traps.[1]

The scenario takes place along the eastern bank of the Krasarang River in Krasarang Wilds. The Horde have holed up in the Temple of the Red Crane, and Tyrande Whisperwind is ready to charge in to root them out. It is up to Varian Wrynn and a group of adventurers to lure the Horde troops out of the temple and kill Commander Scargash. Adventurers are tasked with helping to set up two of five racial traps between the Temple of the Red Crane and Predator's Perch, a hastily-built Alliance camp between the Crane Wing Refuge and the river. 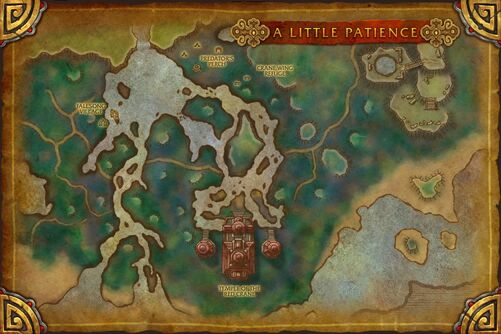 Assist the two groups of laborers in the construction of their defenses.

As the scenario begins, a short cutscene introduces the situation:

There are five racial camps that can build traps: dwarves, gnomes, night elves, jinyu, and pandaren. Interact with any named unit to start construction of a trap. At the trap's location, fan out and help gather supplies by killing mobs or looting objects, then using the looted items back at the trap. The looted items will speed up the pace of construction, which is important, as Varian is only willing to wait for 12 minutes once the first named NPC has been interacted with.

Tyrande Whisperwind says: We are wasting time. We should move in for the kill!
King Varian Wrynn says: Patience, Tyrande.

Tyrande Whisperwind says: You are being tentative, Varian. You must be decisive if you wish to lead the Alliance.
King Varian Wrynn says: Patience, Tyrande. We'll have our victory, but we're not going in unprepared.

Tyrande Whisperwind says: Why do we not attack them outright?
King Varian Wrynn says: I won't throw away Alliance lives. I will accept nothing less than total victory.

Tyrande Whisperwind says: They mock us from within the temple.
King Varian Wrynn says: Good. That means they're about to break.

Engaging the Horde without construction completion

south of Varian and Tyrande, west of the gnomish camp. The dwarves will set up their trap far to the southeast at [61.8, 45.5]

, on the path leading from the Ruins of Dojan and the Temple of the Red Crane. On occasion, an elite unit will attack the camp, stopping all progress.

King Varian Wrynn says: Good sturdy dwarven construction. That ought to do some damage.

south of Varian and Tyrande, east of the dwarven camp. The gnomes will set up their trap far to the south at [38.6, 49.7]

on the path leading from the Temple of the Red Crane to Dawnchaser Retreat. On occasion, an elite unit will attack the camp, stopping all progress.

southwest of Tyrande and Varian, next to the lake.

across the lake to the west at Fallsong Village. The jinyu trap is constructed at [47.9, 54.1]

immediately north of the Temple of the Red Crane. Kor'kron Paratroopers will occasionally drop in to interrupt construction.

King Varian Wrynn says: I see our Jinyu allies are prepared. How go the rest of the preparations?

southeast of Tyrande and Varian, asleep at Crane Wing Refuge. The pandaren will set up dragon guns further east at [57.1, 29.5]

between a small bluff and a tree. The pandaren are prone to falling asleep, but

Defeat Commander Scargash and reclaim the Temple of the Red Crane.

Once both traps have been constructed, Scargash calls in the paratroopers:

The grunts will run in and be destroyed by the traps. Ignore them. Head south down to the Temple of the Red Crane at [47.6, 60.8]

to find two groups of three elites. Take both groups out and Scargash will jump down and become attackable:

Commander Scargash yells: For the warchief!

Heal up, buff up, then start the attack:

Kite him around when he gains Blood Rage, otherwise he does nothing special.

On victory, Varian, Tyrande, and Chi-Ji run in: