A Steamy Romance Novel: Big Brass Bombs is a poor quality book item. It can be obtained by pickpocketing humanoids in Vashj'ir, Twilight Highlands, Uldum, and Deepholm. Additionally, Martar the Not-So-Smart in Jade Forest may drop it as well. 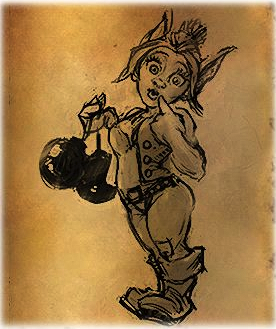 The tough little goblin walked purposefully into the engineering shop, raising her eyebrows at a few items as she approached the shopkeeper.

"How's it going, Jack?" Her voice seductively brushed his pointy ears with the rough texture of someone who inhaled too much motorcycle exhaust.

The goblin called Jack looked up and grinned. "Revi! It's going much better since you just arrived." Jack set his arclight spanner on the table. "What can I do ya for?"

Holding her elbow in one hand, Revi tapped her chin lightly. "I'm not real sure. Ya got any specials?"

"Are you kidding? I've got the best deals anywhere!" Jack replied enthusiastically. "Just got these in this morning, in all sorts of colors. Small red rockets, got some in blue and green too." Revi's disappointed look was not missed by the expert shopkeeper, and he quickly upped the ante. There was a loud 'thud' as Jack dropped something on the table, "I call it The Big One," he said. "It's goblin only, very difficult to find."

"Okay, fine. I can see you're a goblin of superb taste." Jack looked around conspiratorially before carefully laying out a new item, buckling the table with an ominous creak. "It's called..." Jack paused for dramatic effect, "The Bigger One!"

Feeling the advantage, Jack allowed himself to relax a bit. Putting his hands behind his head and leaning back in his chair, he replied with lazily narrowed eyes, "It's 100% goblin parts, baby. Natural resources."

After a moment of hesitation, Revi reached out and gingerly stroked the smooth yellow surface. "I'll take two!"

Revi nodded excitedly and looked behind Jack at something on the wall. "What is that?"

Jack looked over his shoulder. "Oh, those are for reviving dead people."

Revi was intrigued. "Can they be used on someone while they're still alive?"

Never wanting to miss a sale, Jack responded without missing a beat, "Oh sure! Tell you what. You get all this stuff, and I'll throw in a pair of mayhem projection goggles for half price!"

Revi pulled out a sack of coins that made Jack drool. "Why not? Motorcycle sales have been good this year."

As Jack quickly tallied the total, he asked, "This must be a serious raid or somethin'?"

Revi shrugged, "Nah, I got a blind date with a guy named Marcus tonight."

Jack nodded. "What about that guy from the motor club you was datin'?"

The leather-clad goblin scooped up her bag with one arm, and held up an outstretched hand. "He never put a ring on it. A girl's gotta have her priorities."

Jack smiled and shook his head as he watched her walk out of the shop.