A Steamy Romance Novel: Hot and Misty is pickpocketed from from humanoids in Mists of Pandaria-level content. Additionally, Martar the Not-So-Smart in Jade Forest may drop it as well. 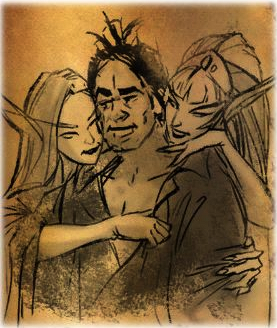 Marcus galloped on his warhorse towards the remote building, bringing an almost imperceptible flush to one of the curvier guards as he passed. He dismounted and handed his reins to the ever-present stablemaster, placing one hand on her shoulder before speaking. "Kama, have you considered our last conversation?" Marcus asked, furrowing his eyebrows in mock seriousness.

Kama rolled her eyes, her pandaren markings exaggerating the movement. "I doubt my life-mate would think much of it."

Marcus let out a bellowing laugh, looking over his shoulder as he walked away, "I'd still like to meet her one day!"

The Tavern in the Mists was unusually crowded, and he pushed his way through the crowd until he stood in the shadows of a dark corner. An exotic voice purred his name, "Marcus, it is good to see you again."

Marcus smiled and squinted as his eyes adjusted to the absence of light. "Madam Goya, the pleasure is all mine." She dipped a polite bow; Marcus felt a sudden warmth as he was reminded of why the term bouncy was often used to describe the pandaren. He bowed in kind, catching Madam Goya's hand and kissing it gently, never shifting his gaze from the hulking bodyguard standing behind her, a single scar between his watchful eyes.

"So, Marcus, can I interest you in something... special? I'm afraid the usual cannot be offered today." Marcus did not miss her emphasis on 'the usual', nor the deep regret that laced her words. Their eyes met once again and she squeezed his hand before letting go.

"If that is your will, may I see what you have to offer?" Marcus asked.

"There are several magnificent pieces of armor, a tiny companion, and even an exotic mount," Madam Goya answered, her typical playfulness quickly returning. She paused and held a hand to her chin, feigning thoughtfulness. "But my most valuable treasures are located upstairs."

Marcus's eyebrows lifted comically and his eyes widened before his expression settled into gleeful acceptance. "Until we meet again, then." Her eyes fluttered and Marcus found himself walking up the stairs of the strange tavern.

Waiting in the room at the top were two beings of such beauty that he nearly stumbled on the final step. One had long flowing hair the color of the Sunwell itself, and the other kept her ebon hair cropped short. After several long moments of wordless, lust-filled glances, a realization struck him: he was looking into the face of the enemy! He unsheathed his mighty sword, bathing the blood elves in its pulsating glow.

The elf with radiant hair spoke first. "Goodness, it looks like someone is ready for battle." She placed her hand on the tip of his sword, lowering it with gentle pressure as she crossed in front of him, always keeping her head cocked in his direction. "Do you believe in love at first sight? Or should I walk by again...?"

Marcus leaned in close, carelessly pressing the hardened steel against her. He whispered something quietly in her ear and pulled way, eagerly searching her face for a reaction.

"No. No. I won't do that... but my sister will!" the blonde giggled. The dark-haired one silently raised a single eyebrow, nodding and shrugging her delicate shoulders at the same time. With a subtle gesture, her body glowed with an intense inner fire, burning away what little clothing she wore. As Marcus's muscular arms wrapped around her, she whispered something to him. A symbol, unseen by Marcus, momentarily appeared above his head and surrounded him in a white glow. "That... that feels amazing. What did you do?" he asked.

"Fortitude, my lord. You will need it." It was then that he noticed that she was literally levitating off the ground, weightless in his arms. His mind began to spin as countless scenarios played out in his head. His strong hands began to...

<The remaining pages are shrouded in mist.>