A Steamy Romance Novel: Nightborne of the Living Dead

A Steamy Romance Novel: Nightborne of the Living Dead can be obtained from using

A Steamy Romance Novel: Nightborne of the Living Dead 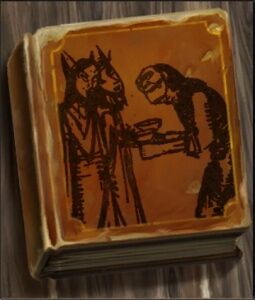 She accepted the chalice of wine with a bat of her long lashes. "I really shouldn't, Lord Gravesbane. My mother would never approve."

"Nonsense, my dear Elonia," the nobleman answered. "You are ten-thousand years old. I'm sure your mother would forgive you for indulging just this once."

She giggled. "It's not the wine, my lord. Rather, it's the notion of a nightborne spending her evening in the company of someone so..."

"I was going to say decrepit."

"My morals are not quite that far gone, I assure you," he replied, his good eye drifting up and down the length of her flowing gown. "I'm sure your mother would find me most endearing."

"Oh would I?" asked a sharp voice. Crispin Gravesbane turned to see another nightborne framed within the doorway. Though her attire was less inviting than her daughter's, her face and body were a mirror of Elonia's own.

He approached and bowed, hastily kicking aside the kneecap that clattered to the floor. "I am Lord Crispin Gravesbane, at your service. Do I have the honor of meeting Lady Marina?"

"You do," she answered coldly, casting a harsh glance toward Elonia.

"I fear you are toying with me, good lady," he smiled, careful to hold his jaw in place. "Surely you must be Elonia's sister, not her mother."

A faint blush flashed across Lady Marina's cheeks. "You flatter me, my lord." Her voice softened. "It has been centuries since anyone has mistaken us for siblings."

"Nonsense!" he insisted, taking her hand and guiding her toward the couch. He sat down between the two indigo-skinned elves. "Perhaps after we share a bit of wine, we'll find out what else you and your daughter have in common."

"Oh, Lord Gravesbane!" Marina swooned. She took Elonia's hand, sharing a furtive smile with her daughter. "Perhaps it's time we introduced you to the true secrets of the shal'dorei."

<Subsequent pages seem to have been scribbled over in nightborne profanities.>