A Steamy Romance Novel: Of Elven Bondage can be obtained from using 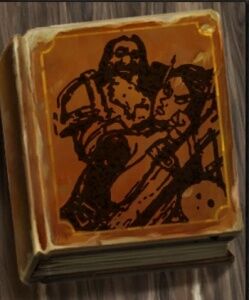 The weight of his fist crashed into the side of the ogre's face with a meaty thunk. The bulbous goon teetered for a moment like a marionette cut loose from its strings before falling into a heap atop his unconcious[sic] sibling. The Drektooth brothers may have been feared throughout the land, but the courage of Sir Crispin Greymane had won the day once again.

The brave hero had no time to pause and admire his handiwork... not when Lady Moonshade remained shackled to the wall. Greymane strode to her side, each step as graceful as a ram of Dun Morogh. "You are unhurt, my lady? I trust these brutes did not cause you harm."

She breathed a relieved sigh as he broke away the bonds that held wrists and ankles. "Your swift arrival saw to that, noble champion," she answered. The night elf's glowing eyes beamed upon him like stars on a cloudless night. "The greatest suffering was enduring the ogres' lecherous glances. My leather armor was damaged during my capture, and several pieces seem to have fallen away." She made a halfhearted attempt to cover the bareness of her taut midriff.

"Of course a knight performing his duty would not notice such a quandry," he assured her, taking her hand and lightly massaging her bruised wrist as she rose to her feet.

Standing her full height, Lady Moonshade was at least three heads taller than her savior, if not more. She puzzled at him a moment. "Forgive me, good sir, but I cannot discern if you are the shortest human I have ever met, or the tallest dwarf."

His white teeth flashed through the thickness of his beard like snowcaps on a mountain ridge. "I like to think I'm the best of both, good lady." He gestured toward the doorway. "A spacious carriage awaits to convey you back home. I assure you, my driver will not disturb us as I personally see to your recovery. I will do my best to ensure the ride is to your liking."

A playful smile danced about her lips. "I hope I can rely upon your driver's discretion. I fear the rest of my fragile armor might fall away at any moment."

The ruggedly handsome knight bowed and flashed a confident wink. "Why my dear, I'm positively counting on it!"

"Oh, Sir Greymane!" she swooned, falling into his arms. He guided her toward the waiting coach, stepping over the unconscious ogres on the floor.

<The story continues for many more chapters, laden with vehicle metaphors.>