Not to be confused with Abby.

Abby Lewis is a human child located at the Glenbrook Homestead in Drustvar. 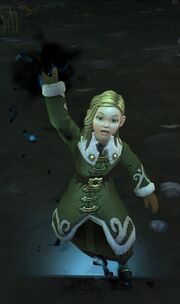 Abby is a strange girl found roaming around Glenbrook by herself. Signing a song of the fate befallen on her village, she is found by a passing by adventurer. Feeling alone and with no one to play with, the little girl asked them to help her find her playmates—Mr. Munchykins, Trunksy, Mayor Striggs, and Smoochums.[1][2] Along the way, the adventurer found the former townsfolk in the Glenbrook Hunting Grounds, with Abby narrating how their lives ended. This led them to a cave where an unresponsive Annie Warren was found.[3] Before being able to understand what was going on, Abby appeared from behind and asked them to follow her. With all of her playmates ready, it was finally time for a tea party. Arriving at the place, the adventurer noticed a dead Smoochums and all the other party guest surrounded on a sort of gound symbol. At Abby's request, the adventurer reluctantly sat in the middle and was then attacked by a wicker hound. With her goal complete, Abby left the adventurer to their fate, never to be seen again.[4] The adventurer survived the encounter and was soon approached by Annie Warren, who revealed that the villagers thought Abby had died some time ago.[4]

Later on, during the

[120] Her Dog Days Are Over, one can find that Abby appears to have struck again (as her stuffed animals can be found at the sacrificial circle and child's giggles can be heard once again), sacrificing Princess and turning it into a wicker beast. Notably, Princess is not hostile and reunites joyfully with its former owner, Chelsea Wright.

This section contains information that needs to be cleaned up. Reason: Convert into quest notes links.

All the people have gone stiff or fled.
There is no more noise...
...except me and my toys...
...just like all the dark birdies said!

Arriving at the tea party during

After pouring tea during