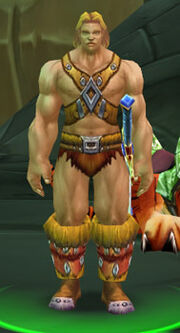 Adam Eternum was an elite level 85 Arathi Basin battlemaster located in the Lower City of the neutral Shattrath City during the Call to Arms: Arathi Basin. His Horde counterpart was Keldor the Lost.

He was only available during the monthly (Call to Arms: Arathi Basin).

Adam Eternum along with Oric Coe returned to Arathi Highlands and participated in the Battle for Stromgarde leading his fellow members of the League of Arathor and fighting against the Horde coming from Ar'gorok.

The subject of this section was removed from World of Warcraft in patch 6.0.2.