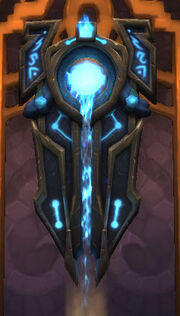 The Aegis of Aggramar is one of the Pillars of Creation, once used to defend Azeroth's young world-soul from madness and corruption.[1] The Pillar came from the titan Aggramar,[2] and can create a great, impenetrable wall of energy to protect its wielder.

During Azeroth's ordering, the Pantheon bestowed the Pillars of Creation to the titanic keepers to aid them with that colossal task. Ages after the keepers had completed their work, the Pillars would become lost and scattered across the lands of Azeroth.[3]

After the Highborne found the Pillars while hunting artifacts throughout Ancient Kalimdor, they guarded them in the Vault of Antiquities in Suramar. During the War of the Ancients, Grand Magistrix Elisande and her allies in Suramar, opposing Queen Azshara, used the Pillars to stop the Burning Legion from creating another portal in the Temple of Elune.[4] After their success, the Aegis of Aggramar somehow came under the possession of Odyn.

Ten millennia later during the third invasion of the Burning Legion, the Aegis of Aggramar was located within the Halls of Valor, Odyn's home. The titanic keeper saw the adventurers that traveled to Stormheim seeking the Aegis to use against the Burning Legion. In the guise of Havi, the keeper guided order leaders through many trials in Stormheim to ensure their valor and worth. After passing the trials that allowed them to reach the Halls of Valor and thwarting the Felskorn, Odyn invited the heroes to the Halls of Valor for their final tasks to claim their prize. The Aegis was used in the battle with God-King Skovald. After killing Skovald and proving themselves to Odyn, the order hall leaders took the Aegis back with them to Dalaran, where it was secured.[5]

Along with the other Pillars, Khadgar used the Aegis' power in conjunction with

[Light's Heart] to return Illidan Stormrage's soul to his body during the final battle with Gul'dan.

In order to close the Burning Legion's portal at the Tomb of Sargeras, the Aegis of Aggramar was placed atop the pinnacle of the Cathedral of Eternal Night.