Aessina is one of the greater wilderness spirits who lurks in dense untamed woods. She is the soul of the forest, its beating heart, the source of life energy that breaks down stone, devours ancient ruins, and fills dense thickets with mystery and fear. Aessina is the center of the web of life.[2] The night elves have built shrines to her throughout Kalimdor, most notably the Shrine of Aessina in the midst of a forest glade in Ashenvale's heart and the Grove of Aessina located in Mount Hyjal.

Aessina is Ysera's everlasting companion, both in the Emerald Dream and the physical world.[3] The Ancient of Lore named Nordu was Aessina's "dearest old friend", until he died in the Firelands attack on Hyjal.[4]

Brann Bronzebeard believes Aessina created the grell, though when he asked her Aessina simply responded "maybe".[5] 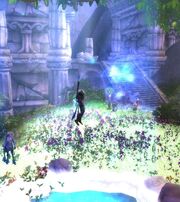 Aessina in World of Warcraft.

At a point in Mount Hyjal questing, players will soon be sought by the wilderness spirit Aessina to assist in cleansing and healing the nearby forest, ultimately returning the land to its former splendor.[6] Aessina herself appears there during the quest

[81] Aessina's Miracle in the form of a large wisp in a glowing light above the grove's moonwell.

Completion of the quest is one of the requirements to being eventually able to access the Molten Front.

[Essence of Regrowth] from the Shade of Xavius, in order to power the

[Idol of the Wild] and commune with Malorne.[7]

Her shrine was built ages ago by the night elves, and lies in the midst of a forest glade in Ashenvale's heart. The shrine is a clear forest pool with a statue of Aessina standing beside it, clothed only in ivy. Dryads are known to visit the shrine to venerate Aessina.[8]