For information on how to defeat him in Legion, see Aggramar (tactics).

Aggramar, the Avenger, is a titan and the former lieutenant of Sargeras. When Sargeras betrayed the Pantheon, Aggramar took up his role of champion, until he was slain by his former tutor and friend.[4] He was then resurrected by Sargeras as his enforcer and guarded the heart of the Burning Legion in Antorus, the Burning Throne until he was freed and rejoined his fellow titans at the Seat of the Pantheon. 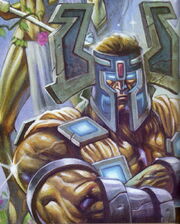 Aggramar in the Warcraft Saga.

Like all titans, Aggramar was born from a world-soul maturing within a planet in the Great Dark Beyond. Though it is not known when exactly he was born in relation to the other members of the Pantheon, what is known is that he was relatively inexperienced in battle when first sent to aid the Pantheon's champion, Sargeras, in his hunt for the demons who threatened the Pantheon's work. Aggramar proved a quick study and soon earned Sargeras' admiration, and became the warrior's trusted lieutenant. The two fought shoulder to shoulder against the endless demons of the Twisting Nether, and together they soon brought peace to the cosmos.[5]

Eventually, Sargeras left the Pantheon over an argument about how to handle the Void corrupting nascent world-souls.

During one of Aggramar's long journeys after Sargeras left, he suddenly sensed the tranquil dreams of a powerful world-soul emanating from the distant reaches of the Great Dark. When he reached the planet, however, he was horrified to find that Old Gods had already infested the world and shrouded its skies in a layer of Void energies. Realizing that Sargeras had been right about the plans of the Old Gods and their void lord masters, Aggramar immediately returned to the Pantheon to inform them of his discovery. He urged the other titans to take action immediately in order to save the nascent world-soul, which would later become known as Azeroth. Eonar the Life-Binder was quick to side with Aggramar, and managed to convince the rest of the Pantheon to save this lost sibling of theirs.[6]

After Sargeras stormed away from the Pantheon, Aggramar continued his quest alone. His mission eventually took him near Draenor, a world not yet discovered by the titans. He lingered among the vast emptiness of the world, listening for the dreams of a world-soul, but heard none. Nonetheless, the planet intrigued him, for he had never seen a place of such voracious and diverse plant life or of such untamed savagery. However, the more he observed the massive botanical hivemind of the Evergrowth, the more he foresaw doom in Draenor's future. If left unchecked, the Evergrowth would consume everything on the world, including the elemental spirits, eventually even devouring itself and leaving Draenor an empty wasteland devoid of life. Aggramar's natural affinity for order compelled him to take action, but he did not wish to completely destroy Draenor's plant life, only to temper it. Thus, he would need to neutralize the Sporemounds, the heart of the Evergrowth's power. The titan considered destroying the Sporemounds himself, but since his power was so great it risked irreparably damaging or even shattering Draenor and because he could not stand guard over the world forever, he instead decided to create a mighty servant in his own image to uproot the Sporemounds.

Aggramar swept his colossal hand over the world and wove its fire, air, earth, and water energies into a massive elemental storm. He channeled the roaring tempest into Draenor's largest mountain, sending the energies blasting through the crust and causing shockwaves of force to echo around the globe. The mountain itself groaned to life and rose up on two colossal legs. Aggramar named his creation Grond, and he would serve as the titan warrior's hand on Draenor. At Aggramar's command, Grond set out to conquer the plants, and as he lumbered across the world, he carved and shaped the landscape to separate the Evergrowth. When he reached the nearest Sporemound, Grond defeated the creature with ease.[7]

As Grond fought the Sporemounds, pieces of his body fell off and came to life as the colossals due to the life essence that stirred within. Even though Grond was killed by Botaan, the final Sporemound, hope swelled within Aggramar at the sight of the colossals. They were not as mighty as Grond, but they were many and their shadows still loomed over the land. Aggramar crafted great discs inscribed with titan runes from the body of Grond and fused them to the colossals, creating armor that granted them strength and resilience. In the meantime, the Evergrowth had begun to retake lands Grond had taken from it. As Aggramar unleashed the colossals against Botaan and the genesaur - creatures that were pieces of the Sporemounds just as colossals were pieces of Grond - he felt a constellar dying somewhere in the Great Dark Beyond and left to investigate with the promise he would return one day. He never did.[8]

Eons after Sargeras left the Pantheon, while the titan-forged went about their duties, Sargeras decided that the only way to save the universe from the corruption of the void lords was to purge it in flame. Unleashing the demons he had imprisoned, and in the process of doing so transforming himself into a twisted, demonic being of hatred, Sargeras began his Burning Crusade to eradicate all life in the universe. Shortly after the newly-formed Burning Legion eradicated its first world, Aggramar arrived to confront his former master, having sensed Sargeras killing the planet's constellar. He demanded an explanation from Sargeras, but when he realized that his words would not sway him, Aggramar challenged the fallen titan to single combat. The battle between the two raged until, in an explosion of fel and arcane power, both of the combatants' blades shattered. Heavily wounded, Aggramar retreated and informed the Pantheon of Sargeras' betrayal.[4]

When the armies of the Pantheon and the Legion confronted one another near the world of Nihilam, Aggramar made one last attempt to reason with Sargeras. He approached his former tutor, unarmed, trying to persuade him by recounting tales of the glorious battles the two had fought. But Sargeras was set in his ways. With a howl of fury and sorrow, the former champion raised his blade and struck Aggramar down, nearly cleaving him in two. Outraged by this murder, the Pantheon launched an all-out assault on Sargeras, but, unable to stand against the fallen titan's fel might, soon perished as well.[4]

Facing an adventurer in 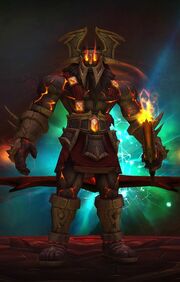 Aggramar is present as an avatar on Argus, infused with the power of his soul corrupted by Sargeras.[9]

Aggramar's corruption was first revealed when Magni Bronzebeard, the Speaker of Azeroth, traveled to Argus with the forces of Azeroth. He received a vision from Argus's world-soul of Aggramar. Sargeras told Aggramar that the circle neared completion and the mortals must not stop the rebirth of the Pantheon, then ordered Aggramar to stop their incursion.[10] In Krokuun, Aggramar arrived and assaulted the forces of the Army of the Light, forcing them to retreat.[11]

Later, Sargeras spoke to Aggramar as the latter watched the Coven of Shivarra torture the souls of Aman'Thul, Norgannon, Khaz'goroth, and Golganneth. Though they refused to be broken, Aggramar assured Sargeras that they would be soon. Sargeras told Aggramar that the essence of Eonar was still needed to ensure victory, and Aggramar promised that she would not escape.[12]

The Avatar of Aggramar serves as the penultimate boss of Antorus, the Burning Throne, where he watches over the world-soul of Argus in the name of Sargeras. After his defeat he is freed from Sargeras's grasp and joins his brothers at the Seat of the Pantheon to aid Azeroth's heroes against Argus the Unmaker. After Argus is defeated, Sargeras strikes out at Azeroth and wounds her heavily in Silithus. Immediately thereafter the Pantheon imprisons him within the Seat of the Pantheon. Illidan Stormrage, who stayed behind while his comrades left, serves as Sargeras's jailer. 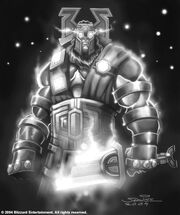 The bronze giant stares down impassively, his body wrapped in a gold toga. A huge, oddly-shaped sword is sheathed across his back; the blade almost looks like the broken shard of some larger construction.[13]

Aggramar is a male Vanir titan. His classes are Fighter and Gladiator.[14] He wields a sword called Taeshalach.[13]

Once Sargeras' lieutenant, Aggramar took over Sargeras' position when his superior changed sides. Aggramar is now in charge of combating the Burning Legion and eliminating its demonic taint. Very bland and unemotional, Aggramar is much more cool-headed than his former master. He follows orders and implements tactics in a firm, professional manner, performing all duties as they should be done. The only emotion he feels is hate: he despises Sargeras with every ounce of his metallic blood. This rage could cloud his judgment and be his doom some day.[13]

Aggramar's sword was once part of a larger weapon called Gorshalach ("Dark Render"), which was the most powerful weapon in the universe. Sargeras wielded the mighty blade until his fall, when the weapon, semi-sentient, sundered itself rather than remain in evil's grasp. Aggramar knows that if he ever unites his half, Taeshalach ("Flame Rend"), with Sargeras's half, Gorribal ("Dark Seether"), Gorshalach will be reborn. He desires this weapon greatly, but has not yet had the courage to confront Sargeras.[15]

Aggramar's portfolio is based on eliminating the forces of destruction and dissolution, especially the Burning Legion, and protecting order from entropy through military prowess and combat might. Few on Azeroth know of Aggramar, though as a member of the Pantheon he receives the respect due to all powerful titans. Champions on numerous worlds revere him and cry his name as they charge into battle against the Burning Legion.[15]

Aggramar might be based upon the Norse god Thor the Thunderer, or he could be based upon the war-god Tyr. Thor and Tyr are the greatest of the Aesir's warriors and the generals of the armies of the gods. Intentional or not, Aggramar also draws parallels to Freyr. Freyr is the nemesis of Surtr, who can be equated with Sargeras, and Freyr has the most powerful sword in Nordic mythology, which is also sentient like Taeshalach. Freyr's sword is one of a pair, meant to combat the sword of Surtr in Ragnarok, as Taeshalach is meant to combat Gorribal.

As he was the only known titan to have interacted with Draenor, Aggramar is very likely the one that left behind several Ancient Titan Chests, the Vault of the Titan in Nagrand, the treasure inside Rukmaz's Vault and the artifacts responsible for the creations of the magic breakers before leaving.