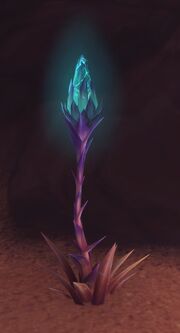 Akunda's Bite is a herb that can be gathered with Herbalism in Vol'dun.

The herb is named after the thunder lizard loa Akunda. It's a surprisingly delicate plant given the harsh environment, and only the strongest seeds—those resilient enough to weather digestion from wild animals—survive.[1][2] Akunda's bite uses electricity to defend itself, building up static as the dry desert winds move against it. The herb's bulb discharges electricity on touch, which kills the valuable leaves if they are still attached. Thus, it is best to harvest the plant's leaves first.[3]

Akunda's Bite nodes can be found all over Vol'dun. It can also drop from Diseased Lashers in the Underrot.