This article is about a faction led by Lord Garithos during the aftermath of the Third War. For the modern faction, see Alliance. For other uses, see Alliance (disambiguation).

The Alliance resistance[1] (normally referred to as simply the Alliance)[2][3][4][5][6] was a force that operated in the aftermath of the Third War and consisted of humans, Kirin Tor,[7] blood elves and dwarves (under both Bronzebeard[8] and Wildhammer[9]) led by Grand Marshal Garithos and Prince Kael'thas Sunstrider.

During the Third War, Dalaran was destroyed by Archimonde,[10] but many of the Burning Legion demons went to Kalimdor and were defeated.[11] By the time of the Third War, Othmar Garithos had risen to the rank of Grand Marshal, promoted not necessarily due to his own abilities, but by his father's reputation and title. He was the highest-ranking survivor of Lordaeron's military after the Scourge's rampage across Lordaeron, and he recruited what forces he could muster from both volunteers and conscripted civilians. Cut off from the chain of command, Garithos gave his human army the mission that he assumed the Alliance should have always had: the preservation of humanity above all else. Ignorant of Garithos' policies, officials from neighboring non-human states such as Ironforge and Quel'Thalas sent him aid, recognizing him as potentially the last remnant of Lordaeron's government, and certainly the strongest warlord in the area.[12] Lord Garithos marshaled the survivors of the Alliance of Lordaeron and managed to retake Dalaran.[8]

In order to survive, the resistance and particularly the blood elves hid caches of gold, lumber and artifacts such as magical small buildings all over western Lordaeron.[13][14] 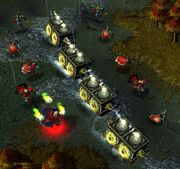 Garithos and his men were joined by Prince Kael'thas Sunstrider and his healthiest warriors[15] voluntarily, although they were met with suspicions by the prejudiced human Garithos. Garithos assigned the blood elves increasingly difficult missions.[16] He stationed them throughout Silverpine Forest and would have perished if not for the help of Tyrande and Maiev.[17] They returned to Dalaran but were scolded by Garithos for their tardiness and ordered them to repair three observatories.[18] After the repairs, Lord Garithos went to the front lines and left Kael'thas to await orders. The next day an emissary sent by Garithos ordered the withdrawal of the human and dwarven troops from Kael'thas' command and sent them to the front lines. Then Dalvengyr and an undead army launched an attack on Kael'thas' bases. When the blood elves were going to be defeated, Lady Vashj and her naga appeared and helped Kael'thas fend off the undead. The combined armies attacked the undead and managed to kill Dalvengyr, but later Garithos arrived and saw the naga. He condemned the blood elves for consorting with naga as an act of treason and imprisoned the blood elves; planning to execute them later.[19]

The Alliance resistance was, so, divided into two groups: the human and dwarves loyal to Garithos and Kael'thas' forces, the blood elves who were imprisoned.

Imprisoned and sentenced to death, the blood elves were rescued by Vashj. Kael'thas fought his way throughout the dungeons of Dalaran against Garithos' Enforcers and his former friend Jailor Kassan. The blood elves planned to reopen the portal opened by Kel'Thuzad that brought Archimonde into Azeroth and redirect it to Outland, where they would then meet Illidan.[16][7] However, they needed to keep Garithos' Elite Guard at bay while his men crossed the portal. Kael'thas, Vashj, and some engineers planned a defense and managed to hold off Garithos until everyone made it through the portal.[20]

Sometime after the blood elves escaped, and Arthas left to defend the Lich King, Garithos and his forces were launching offensives into the Plaguelands, and soon after they were bewitched and mind-controlled by Detheroc.[21] Along with Detheroc's undead the Alliance resistance fought the forces of Sylvanas Windrunner and Varimathras, but were eventually freed from Detheroc's enslavement.[2][21] Sylvanas then proposed an alliance with Garithos, to which he was offended by such an offer as Sylvanas had been part of the undead army that drove the humans out of Lordaeron in the first place. However, running out of military options, he reluctantly agreed to her terms: Garithos' army will aid her in her assault on Balnazzar in exchange for control of Capital City. Garithos assembled his forces and met with Sylvanas outside of her forward base,[2] despite the fact that his clerk, Kristoff, and six other people advised him not to side with the undead.[22]

Sylvanas, Varimathras, and Garithos planned to attack the Capital City. They knew that Balnazzar could only be defeated through attrition, so Sylvanas decided that they would assault his army from two fronts. Garithos' men would attack from the rear, while Sylvanas' forces would attack from the front.[3] During the battle, Garithos' was informed that his dwarven reinforcements were lost. Infuriated, he went out to search for them. When he found them, he insulted them for their incompetence and commanded them to help him in the battle. With both armies attacking from two fronts, Balnazzar's Forces, the Dreadlord Insurgents, and the Dreadlord Loyalists were all defeated.

Balnazzar was "killed" by his brother Varimathras. After this, Garithos ordered Sylvanas and her undead "wretched animals" to leave his city. Sylvanas, however, turned on Garithos and ordered Varimathras to kill him, which the dreadlord gladly did.[3] The resistance is never seen again after the battle.

It is known as the 'New Alliance' in the non-canon Warcraft: The Roleplaying Game.[25]

Balnazzar was unprepared for the alliance between the Forsaken and Lord Garithos' forces. After dealing with the dreadlord, Lady Sylvanas then turned on Garithos and slew him and his army to the man.[26]

After Garithos' death, the remaining resistance members may have been killed by Sylvanas' forces as well. This may be supported by the wording of Cycle of Hatred which states that the undead creatures betrayed Garithos and his warriors,[22] probably implying that the Forsaken went after Garithos' men as well. They could have also been killed by the remaining Scourge in the Plaguelands. Alternatively, they could have escaped and joined the Knights of the Silver Hand under Saidan Dathrohan or the human pockets in Silverpine and Hillsbrad or the Alliance in Stormwind City.