Allied races are a type of playable race introduced with Battle for Azeroth that can only be unlocked and used after fulfilling certain in-game requirements.

Allied races are, from a design point of view, alternate versions of the main races. They mostly use the skeleton of an existing race but altered and with a different model. They also have their own racial abilities. Allied races get a full character kit including their own emotes, flirts, funnies, exertions, and so on.[1] All current allied races are variants of a previously playable race, with the exception of vulpera, which are only goblins in build.

Each race is associated with an achievement in order to unlock. These requirements are account wide, not character bound, so players can earn each requirement on different characters on different realms and still unlock the allied race. After a player meets the requirements for a given race, they must head to their faction's embassy - Alliance players can recruit them from the Stormwind Embassy, and Horde players from the Orgrimmar Embassy. They will be given a quest chain that, upon completion, will grant them the ability to create a new character for that allied race, which will start at level 10. Upon reaching level 50 without using a level boost or Recruit-A-Friend boost, they are rewarded with a heritage armor set.

Allied race recruitment quests can't currently be repeated, but there could be an option to repeat them in the future.[2]

Draenor orcs were first announced by Ion Hazzikostas on January 30 2018.[4] On March 15, they were confirmed to be named "Mag'har orcs".

The Kul Tiran humans were first announced by Ion Hazzikostas on March 15 2018.[5]

Mag'har orcs and Dark Iron dwarves are available after completing the Battle for Azeroth War Campaign. The Kul Tiran humans and Zandalari trolls were recruited later in the expansion after they respectively join the Alliance and the Horde.[6]

Vulpera and Mechagnomes were announced as new Horde and Alliance allied races respectively in patch 8.3.[7] 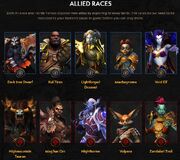 Class balance on factions is more linked to lore than equality.[8] It was also stated that there are no plans to give hero classes to allied races in Battle for Azeroth, but in the future the door is open to it.[9] All the allied races will receive access to death knights starting in Shadowlands, with those who pre-purchased the expansion able to create them in patch 8.3.0.

For other new race speculations, see the race ideas article.