Alone in the Abyss 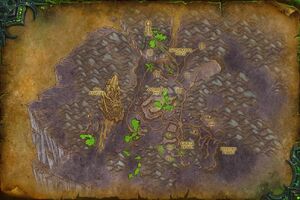 Champion, we will suffer the same fate as the Army of the Light if the Legion fires that infernal weapon upon us.

We must descend into the siege camp below and destroy it while we still can!

Welcome to Argus, homeworld of the Burning Legion.

Quest accept
Prophet Velen says: Romuul, send our vanguard to establish a front.
Grand Artificer Romuul says: Activating transport array.
With the exception of Illidan, the assembled allies are quickly teleported to the surface.
Prophet Velen says: <Name>, we will descend together once you are prepared.
Grand Artificer Romuul says: On your mark, <name>.

Take me to the surface.

The surface
You are sent to a space in front of where the ship's bunker has smashed the area clear. Nearby, two Exodar Vindicators look over the scared planet from the ridge.
Exodar Vindicator says: Our home... what has it become?
Further on, a vindicator mournfully cradles the body of a dead comrade.
Exodar Vindicator says: No, Light please. Not after we have come this far!
On another ridge further on, Velen and Illidan overlook the battle going on below as the allies beat back the attackers. Velen has cast shields to use as barriers and is actively shielding everyone from the siege weapon as it fires on them. NPCs that were on the Vindicaar such as Silgryn and Vindicator Boros are seen fighting as well.
Prophet Velen says: Hold your ground! We must protect the Vindicaar with our lives!