Ammunae, Construct of Life, is a boss in Halls of Origination.

Ammunae is one of the guardians of the Halls of Origination. Like the other constructs within the halls, Ammunae was created to protect the powerful device capable of resetting all life on Azeroth. Each of the keepers has a sphere of influence. Isiset presides over magic; Ammunae, life; Setesh, chaos; and Rajh, the sun.[2]

In the early stages of the Fourth War, High Commander Kamses confirmed that Rajh and the other keepers were dead.[1] After N'Zoth was freed from its prison, and the Black Empire invaded Uldum, a Void-corrupted version of Ammunae could be briefly seen in the Old God's vision of the Halls.

Although designed to reduce Azeroth to its base elements, the reordering system inside the Halls of Origination also creates new life. To that end, the construct Ammunae regulates the natural energies coursing through the facility to ensure that life will exist on a reforged Azeroth. 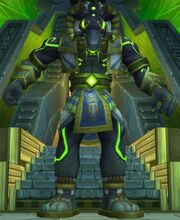 Aggro
This chamber will flourish with your life energy!

Ammunae appears as one of the bosses that can be encountered in the Tombs of Terror adventure in the Saviors of Uldum expansion for Hearthstone.