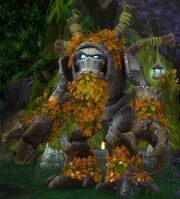 An Ancient of Lore in World of Warcraft. 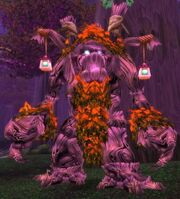 An Ancient of Lore in World of Warcraft model before patch 8.1.

An Ancient of Lore in Warcraft III.

“Nature favors those willing to learn its secrets.”

A type of ancient, the ancients of lore are the keepers of wisdom, and the living keys necessary to unlock nature’s most guarded secrets. Contact with the venerated Druids of the Claw is only made possible through the existence of this enlightened sentinel. The knowledge of this ancient is necessary also to enable communion with the enigmatic, free-spirited dryads.[1]

An ancient of lore seems to be in a constant state of autumn - its leaves are gold and scarlet. Its craggy face bears a look of wisdom. Lanterns hang from its branches, symbolizing the light of wisdom. Ancients of lore instruct nascent night elf druids and priests about the ways of magic and the secrets of nature. Ancients of lore prefer to use their spells to bolster their allies, but in times of great conflict they turn their magic abilities and their powerful arms on their enemies.[2]