This article is about the race as a whole. For other uses, see Ancient of War (disambiguation). 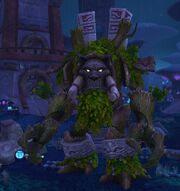 A green Ancient of War

An Ancient of War in Warcraft III.

“Nature is a powerful force. Those who seek to subdue never succeed in doing so permanently.”

One of the toughest types of ancient, Ancients of War (also spelled ancients of war) are mighty nature elementals often found defending night elf settlements such as Darnassus, or supporting Alliance forces in battle.

Embodied in these ancient guardians are the spirits of courage and determination that are necessary to propel the will of the night elves. Calling upon the long-forgotten energies of conflicts from ages past, these guardians provide a link to the brutal side of nature and the cycle of life and death that rules all creation.[1]

During the third war these ancients were in charge of training Archers and Huntresses and the assembling of Ballista and Glaive Throwers, as well as assisting in research regarding the abilities of those groups. In more recent times they have been called into action to aid the Alliance in battle-torn zones such as Alterac Valley and Ashran.

Ancients of War train night elves in the arts of weaponry. Their tutelage creates the highly skilled archers and huntresses for which the night elf armies were famous during the Third War. An Ancient of War charges into melee, beginning combat by trampling smaller creatures (if it faces many of them) or with an awesome blow (if it faces few). It then pummels its opponents with its slams. Two long tusks protrude from this ancient's gray, craggy face.[2]