Andorgos is a member of the Brood of Malygos.

Andorgos is seen inside the Temple of Ahn'Qiraj who gives adventurers high level helms and shoulders for turning in special loot items. Kandrostrasz gives adventurers boots and pants while Vethsera gives chest items. The three are located just past The Prophet Skeram.

Andorgos, along with Kandrostrasz and Vethsera, came to the Temple of Ahn'Qiraj after sensing their enslaved brethren deep inside the Qiraji city. However they are unable to attempt to rescue their flightmembers without also falling prey to same spell which holds Caelestrasz, Arygos, and Merithra as C'Thun's slaves. The three wait at the entrance of the temple hoping to find adventurers who will venture into the city to free their brethren, and provide the adventurers with powerful pieces of armor in return for bringing them specific items obtained from defeating C'Thun and his minions.

Andorgos will teleport you to the Twin Emperors' chamber once they have been defeated, or to C'Thun's chamber after you first encounter him.

The Siege of Wyrmrest Temple 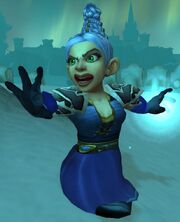 Andorgos appears in the Dragon Soul raid after players have defeated Morchok, where she maintains a portal to teleport players to Wyrmrest Temple. Interestingly, she still is affiliated with the Brood of Malygos.

Step carefully mortal. You tread where mightier beings have met their fate.