For the carrier that served on Alternate Draenor, see Anduin's Prayer. For the paladin, see Duke Lionheart. 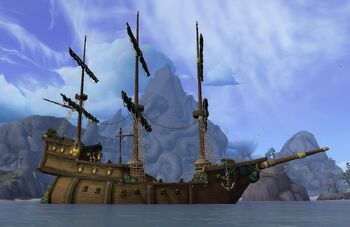 At the time of the Fourth War, the residents of Kul Tiras constructed a unique vessel as a gift for High King Anduin Wrynn, which would become his personal flagship: a Kul Tiran naval warship built to a standard not seen since the Third War. The act was intended to officially seal Kul Tiras's reentry into the Alliance and was overseen by Lord Admiral Jaina Proudmoore.

Several names were put forward for the ship before its delivery, including Anduin's Wrath, Dawnsailor, Tiffin's Melody, and The Lionheart. The final decision on this would ultimately be left in the hands of an Alliance hero who was pivotal in its construction. The ship's maiden voyage took it from Port Fogtide in Stormsong Valley, to Stormwind City's harbor, where it was personally received by King Anduin himself.[1]

As the Fourth War raged on, Lord Admiral Jaina Proudmoore sought to construct a new vessel for King Anduin Wrynn in order to fully symbolize her kingdom's return to the Alliance. To this end, she began recruiting Kul Tirans from across the kingdom to take part in the project, with the help of Cyrus Crestfall and an Alliance champion. Having first located the famed shipwright Dorian Atwater and convincing her to construct the vessel, the group next went about securing Port Fogtide in Stormsong Valley to act as a dockyard, while also collecting necessary materials from across Kul Tiras.

Wood for the vessel was sourced from the Algerson Lumber Yard near Boralus, though the shipment needed to first be purified of dark influence with the aid of Drustvar's Thornspeakers. Their leader, Ulfar, succeeded in cleansing the wood at their request, and sent the Thornspeakers to Stormsong to further aid construction. Meanwhile, ore required for the ship had to be retrieved from Bleak Hills Mine in northern Drustvar, run by Chelsea Wright. With her aid, the mine's storeroom was secured, and the contents sent straight to Port Fogtide.

With construction nearing completion, Jaina Proudmoore set about securing a crew for the vessel. Working with her brother Tandred Proudmoore, who agreed to serve as captain, Jaina's agents also enlisted Brother Pike as tidesage, Lieutenant Tarenfold as master gunner, and the Outriggers of Tiragarde Sound to form the bulk of the crew. Outrigger Captain Rosaline Madison would also agree to serve as first mate, despite initial reservations. Just before its first voyage, Tandred would ultimately convince shipwright Atwater herself to leave retirement and act as boatswain on the new ship, reasoning that if she wanted the best boatswain possible for her creation, it would have to be her. Naming the vessel was left in the hands of Jaina's champion, based on suggestions from those present.[2] Options included:

Once named, Brother Pike performed a ritual blessing and dedication on the vessel, before it set off on its maiden voyage to Stormwind Harbor to be presented to King Anduin. On the deck of the ship, Anduin was officially presented with the gift as a symbol of Kul Tiras's renewed pledge, with other Alliance leaders also in attendance. Anduin himself expressed his gratitude for the gesture, and once again welcomed the Kul Tirans into the fold. The ship would dock in Stormwind Harbor.

The flagship's crew is composed of notable individuals handpicked from across Kul Tiras, including: