This article is about the area. For the battle that occurred here, see Battle of Angrathar the Wrathgate. For the TCG set, see Wrathgate (TCG). 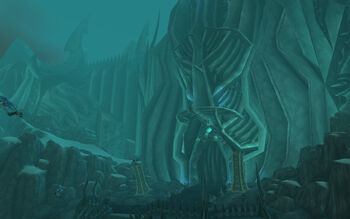 Angrathar the Wrathgate is a barred entrance to Icecrown Citadel and is located in the northwest of Dragonblight. The Wrath Gate is under siege by both Horde and Alliance forces. They have set up the bases of Fordragon Hold, for the Alliance, and Kor'kron Vanguard, for the Horde. Their forces intend to storm into the Citadel. It is commonly here where characters (with the exception of death knights) will have their first direct encounter with the Lich King and the "first act" of the expansion will culminate.[1] It is made of Saronite, a metal called "Black Blood of Yogg-Saron" by the tuskarr.[2] 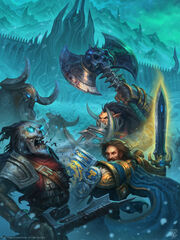 Dranosh and Bolvar fighting the undead at the Wrathgate.

After being cleaned by the red dragonflight.

A major quest chain exists involving the Alliance and Horde forces garrisoned outside the Wrath Gate. To activate this chain, several other chains in Dragonblight must be completed.

Upon the completion of these quest chains, players can watch a cutscene depicting a great battle at the Wrath Gate. This cutscene can be repeated by speaking to Alexstrasza who can be found (along with Korialstrasz) standing on the fiery battlefield.

After completing these quests, the player receives

[Veteran of the Wrathgate].

Upon completion of the Battle of Angrathar the Wrathgate, the region is largely depopulated, but those remaining are still screaming from the effects of the battle.

Assault on Angrathar the Wrathgate 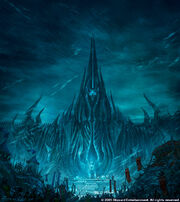 The Wrath Gate is crafted to look like the Helm of Domination.[3]