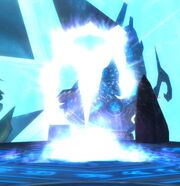 Anomalus is a gigantic arcane elemental boss in the Nexus. He came into being when the Rift formed due to the high amounts of magical energy streaming through the Nexus daily. He was used as one of the guards to the Nexus and to Keristrasza's prison. Now, Anomalus seems to have gone out of control as his Chaos Rifts and lesser Arcane elementals are attacking the blue dragonflight.

Directing so much of Azeroth's arcane energy through the Nexus has created tears in reality. As Malygos's forces try to drive back invading creatures, the chaotic arcane power has taken form as Anomalus. If the creature is not stopped, it will unmake everything it can touch.

When Anomalous reaches 75%, 50% and 25% health, he creates a Chaotic Rift and uses Rift Shield to become immune to all damage. The Chaotic Rifts themselves can cast spells, which are the Crazed Mana-Wraiths, that the rifts summon, cast

Do not attempt to kite the boss around

This boss is best tanked on the main platform that he stands on. Keep the tank on him and have 2 DPS make macros for "/target Chaotic Rift" in order to quickly take out the many rifts he will spawn.

The range on the Chaotic Rifts have a very long range of attack that will span from the main platform past the 2nd platform you ran up, to get to the boss.

[Chaos Theory]: Defeat Anomalous in The Nexus on Heroic Difficulty without destroying any Chaotic Rifts. As of Patch 3.3.2, He only casts Create Rift once throughout the fight, making this achievement much simpler than before.

This achievement is quite tough, definitely the hardest of the instance. To do it, it is a good idea to first clear all trash on the large lower area with the mana wraiths. Your healer's mana is the main issue, as the charged rifts throw off a ton of damage, especially at lower health. When you pull the boss, tank him toward the back of his platform until he forms the first rift. Do not blow cooldowns immediately, save them. When he puts up the first rift shield, everyone runs down to the second platform's far edge to avoid the mana wraiths. Kill any that aggro, and then concentrate on survivability. If you can heal, heal yourself to save your healer mana. When Anomalus' shield is up, he will run down to you. Repeat this technique for every shield, making sure you are out of range of the wraiths. Note that when he puts up a shield, every single rift that is up will become charged, meaning you take far more damage later in the fight. This is why saving cooldowns until at least 50% is a good idea, as your healer will run out of mana very fast. A Paladin healer or a disc priest would probably have a much more difficult time doing this than a druid, shaman, or CoH priest.

Alternate Strategy: Similar to the first strategy, clear out every trash pull from the lower levels and the platforms leading back to the entrance. His charging (going immune) only occurs when he is near 2 rifts at the same time. The tank should kite him about 20 yards each time he opens a rift. If you keep him away from his rifts, he will not go immune and charge, making it much easier to kill him and the healer less likely to OOM. You can continue kiting him toward the beginning of the dungeon as long as you need to take him down (our group had the tank and healer left alive from 100k to dead, no charging). The adds still spawn and attack, but only the ones from the rifts nearest you. Any healer should be able to complete this strategy, assuming the group has appropriate levels of gear.

Killing a player
Expiration is necessary.