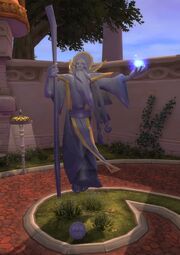 The Antonidas Memorial is located between the Magus Commerce Exchange and Sunreaver's Sanctuary in Dalaran. It is a monument to the late archmage Antonidas, the previous leader of the Kirin Tor, who was killed by Arthas Menethil shortly before the fall of Dalaran.

The statue was designed by Antonidas' student Jaina Proudmoore, who also covered the costs and selected the artist.[1] The statue hovers about six feet above the grass thanks to a spell[1][2] and depicts Antonidas holding a constantly-turning orb sparkling with magic in one hand and his greatstaff, Archus, in the other.[1] The statue is accompanied by a plaque with an inscription from Jaina.

After Theramore fell, Jaina visited the memorial, and had an argument with Kalecgos when he refused her to aid her in destroying the Horde.

Lieutenant Corwin and his men (the Stormwind Cleric‎s and Stormwind Footmen) are stationed by the monument during the Purge.

Following the Argus Campaign, Kalecgos and Jaina met here again. She confirmed that she would not be returning and had to continue finding her own place.

A marker stone named Archmage Antonidas was added when Wrath of the Lich King went live which reads:

The great city of Dalaran stands once again - a testament to the tenacity and will of its greatest son.

Your sacrifices will not have been in vain, dearest friend.

With Love and Honor,