The anubisaths are titan-forged giants made of obsidian. Originally assigned by Highkeeper Ra to safeguard the fortresses of Uldum and Ahn'Qiraj, the ones guarding the latter were eventually enslaved by the qiraji. 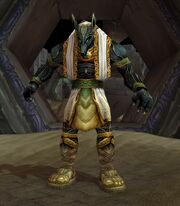 Like most other titan-forged, the anubisaths were wrought from the Forge of Wills. Along with the majority of the tol'vir and mogu, they accompanied Highkeeper Ra when he traveled south from Ulduar. The anubisaths helped their master install the Forge of Origination in Uldum and assisted him in constructing the fortress of Ahn'Qiraj, before being assigned by the Highkeeper to watch over the two areas.[1] When Ra fell mysteriously silent, the anubisaths continued their sacred charge of watching over Ahn'Qiraj, but they soon became afflicted by the Curse of Flesh when Loken's servants traveled south in search of the missing Highkeeper.[2]

Many years later, a group of aqir that traveled southwest overthrew and enslaved the anubisaths of Ahn'Qiraj. The enslaved titan-forged aided the aqir in their battles against the Gurubashi trolls, but the trolls eventually managed to contain the insectoid threat within Ahn'Qiraj.[3]

Within Ahn'Qiraj, the surviving aqir soon evolved into a new race: the qiraji. Countless years after their defeat at the hands of the trolls, the qiraji once again launched an assault on the mortal world, marking the start of the War of the Shifting Sands. Their colossal anubisath slaves proved to be efficient killing machines, with a single one of the giants able to smash through an entire unit of night elf Sentinels. Though the strongest anubisaths were used as elite shock troops, General Rajaxx assigned most of the giants to the front lines, knowing that they would strike fear into the hearts of the elves. However, once the bronze dragonflight entered the war, the tide of battle turned. As the few anubisaths capable of casting spells were far from the front lines, the dragons were able to concentrate their attacks on the giants with ease, and nearly every anubisath was destroyed in the initial assault.[4]

However, one anubisath found a way to strike back against the dragons. Known as Ossirian, he managed to hurl his obsidian sword through the wing of the great dragon Grakkarond. Though the dragon nearly mauled Ossirian to death, the remaining anubisaths and qiraji were able to overwhelm the now grounded wyrm. The wounded Ossirian was dragged back into Ahn'Qiraj, where it is said that he found favor with C'Thun itself.

When he awoke, the anubisath found that his strength had been greatly bolstered and his wounded head had been transformed into the shape of a hawk. Emperor Vek'nilash explained that for his bravery and cunning, Ossirian had received a gift; his essence had been bound to several crystals within Ahn'Qiraj, which would grant him near invincibility as long as he remained close to them. When the other anubisaths heard of Ossirian's survival, they began referring to him as "the Unscarred" and revered him as a hero. Ever since Ossirian's victory, the Bones of Grakkarond have remained a sacred site to the anubisaths; a testimony to their ability to defeat even the most powerful of enemies.[4]

When the Old God N'Zoth was freed from its prison, anubisaths that were corrupted almost beyond recognition appeared alongside the aqir and newly forged obsidian destroyers as part of its forces in Uldum. More were also in Ny'alotha. Infused with the power of N'Zoth, these anubisath appear significantly different from those who served C'Thun. Their heads appear to be missing, replaced with a hood filled with blackness and several small glowing eyes. Their skin changed to a dark purple and their feet changed into claws. 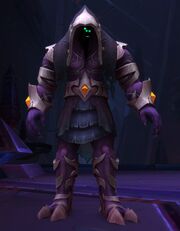 An anubisath corrupted by N'Zoth in Ny'alotha.