“She was the most innocent soul—yes, soul—one could have ever met. No guile. No pretense. She was who she was... even if she wasn't, in truth.”

Anveena Teague appeared to be a kind and beautiful human peasant girl from Tarren Mill. Unbeknown to anyone, she was in fact not a human at all, but rather the remaining energies of the Sunwell transfigured into the form of a human avatar by the red dragon Korialstrasz. 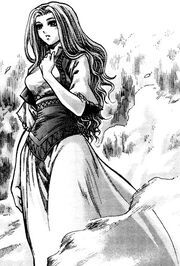 The illusion created by Korialstrasz had Anveena living with a doting mother and father in a small house somewhere near Tarren Mill. Unexpectedly to the red dragon, Anveena began to develop a life of her own with feelings and emotions. She discovered the blue dragon Kalecgos caught up in the net of dragon hunters led by Harkyn Grymstone and gave him shelter. Forced to flee when the dragon hunters attacked, Anveena and Kalecgos were thrown into a lake by a blast from one of the hunters' guns but managed to survive. As they made their way back to her home, they discovered it was on fire, and Anveena tried in vain to find her parents. It was then that they met Dar'Khan Drathir, a high elf who had betrayed his people to the Scourge, and was seeking the power of the Sunwell. Dar'Khan placed an enchanted ring of binding on both her and Kalec's necks and demanded to know the location of the Sunwell energies. They were saved by the timely arrival of Kalec's intended, Tyrygosa, who took them to Tarren Mill to locate the mysterious "Borel".[2]

After confronting Dar'Khan once more in Tarren Mill and being joined by the paladin Jorad Mace, Anveena, Kalec, and Tyri made their way towards the Hinterlands, but were brought down in the Alterac Mountains by a frost wyrm. Anveena was found by the tauren Trag Highmountain, who took her to the ruined castle of Baron Valimar Mordis, an undead nobleman who lived in the area. The Baron sought to use her power to energize the Orb of Ner'zhul he had captured from the ghoul Ichor, and raise an army to combat the Scourge (and the living as well). Binding Anveena to the Orb, the Baron resurrected undead behemoths and frost wyrms to do his bidding but was stopped when Trag destroyed the orb in the Baron's hand. Shortly afterward, Anveena was captured by Dar'Khan, who took her to the place where she was "born": the ravaged lands of Quel'Thalas.[3]

Dar'Khan was at first successful in harvesting the energies from her, and had gained enough power to strike down even a mighty dragon with a single attack, and take control of a dragon himself (Korialstrasz). But at that moment, the power within Anveena awakened. Understanding the true nature of her power and informing him that he had no power over her, Anveena lashed out at Dar'Khan, completely obliterating the traitor, now more lich than mortal. Afterwards, Korialstrasz revealed himself and explained fully what he had done to hide the Sunwell's energies from the Scourge.

With the support of Lor'themar Theron, Regent of Quel'Thalas, Anveena and Kalec remained at an undisclosed location in Quel'Thalas under the blood elves' protection. Anveena's identity remained a secret, guarded by her immediate circle (Kalec, Tyri, Jorad, Lor'themar and Halduron Brightwing). A few others also knew about her existence, however, such as the Dragon Aspects and Sylvanas Windrunner.[4] Agents of the demon lord Kil'jaeden eventually assumed the forms of blood elves, infiltrated the kingdom's inner circle and learned of Anveena. Kil'jaeden concluded that she would be the key to transforming the Sunwell into a gateway that would allow him to launch an invasion of Azeroth.[5]

Anveena and Kalec developed strong feelings for one another during the aforementioned events.

Fury of the Sunwell 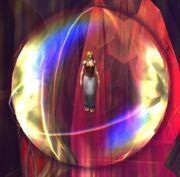 Lor'themar and his followers initially kept Anveena's presence a secret from their prince, Kael'thas Sunstrider, who was in Outland at the time. They did not know what would happen if Anveena's power was infused into the Sunwell and feared that the prince might act without considering the consequences if he discovered her existence. Lor'themar later had a change of heart and believed that telling Kael'thas about Anveena was the only way to convince him to return home to Quel'Thalas, but the regent lord's messengers were intercepted by Kil'jaeden's agents in Quel'Thalas; the demon lord wanted to place Kael'thas under his control and needed the prince to lose all hope of restoring his kingdom.[6] Once he won him to his side, Kil'jaeden ordered the prince to capture Anveena and M'uru and weave their energy into a ritual to summon the demon lord.[7] Anveena was imprisoned in a field of arcane power[8] within the Sunwell Plateau, where her powers were drained into the Sunwell.[9] The Shattered Sun Offensive was created to rescue Anveena and end Kael's menace once and for all.

During the ensuing battle, Anveena realized that Kil'jaeden was too powerful for the mortal heroes of Azeroth to defeat alone. Choosing to give her life over theirs, she unleashed her full powers against the Deceiver, weakening him enough so he could be banished back to the depths of the Twisting Nether. But Anveena was gone.

The powers of the Sunwell that had been embodied inside Anveena returned to their original state, purified by the heart of M'uru. Anveena had also secretly imbued Kalec with a portion of the Sunwell's power—her power—so that, in a literal sense, a piece of her would live on in his heart.[10] Korialstrasz later noticed this unique touch of power in the blue dragon's magical essence but chose to respect Anveena's wish of keeping it secret from Kalec.[11]

Given that Anveena was formed from the remains of the Sunwell's energies and that the Sunwell was created from the waters of the Well of Eternity—the lifeblood of the nascent world-soul of Azeroth—she could be seen as an incarnation or avatar of the world-soul. However, she developed sentience and a personality of her own, so one could argue that she evolved beyond that.