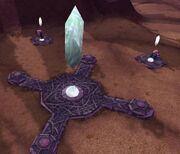 Apexis Monuments work very similarly to Apexis Relics in that they use colored lights to activate its vibrations. However, it requires 35 [Apexis Shards] to activate, and requires four people — one on each colored button — to run it, although it is possible for 2 people, stationed opposite each other between buttons, to operate it in a pinch. After six rounds, or once your group fails a round of the activation, an

Apexis Guardian — a construct left to defend the Monument — will appear and attack. Defeating it is the objective of

[70] Guardian of the Monument.

The Apexis Monument looms above you.