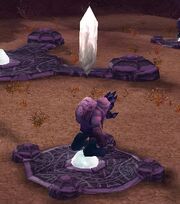 An Apexis Relic with a Gan'arg Analyzer looking it over.

Apexis Relics come in groups of 4 near an Apexis Monument. Each Relic is protected by one non-elite mob. The relics can be activated by right-clicking on them. If you do not have an

[Apexis Shard] with you it will only give a message that the Relic is almost intelligent. When the bearer does have an shard though it allows you to activate the Relic.

When the relic is activated it will start to glow on the middle crystal and show and glow on the four colored side buttons. When the crystal is fully powered it will show a colored ray arcing to one of the buttons. The idea of the game, like Simon, is that you follow the order of the colors which the relic gives.

Each round will add a counter to the number of buttons you have to press, starting from 1 going all the way up to 10. It becomes seemingly harder to remember all the colors. If you happen to make a mistake you will get zapped by a red lightning bolt damaging you for up to 4000 damage. Depending on the round you are it will give you 1 or more chances to try again. This lightning bolt can kill.

If you complete enough rounds with the Relic, you gain a buff that provides +15% movement speed while in the Blade's Edge Plateaus, and persists through death.

The Apexis Relic shimmers, betraying a hidden intelligence within.

[70] An Apexis Relic. Apexis Emanations (from 8 rounds) is required for the daily quest

The red lightning bolt can and will kill you so watch out. Depending on how good your memory is use a pen and piece of paper to write down the colors of the order. If you fail to make the good choice it will deactivate without giving the buff and using up the

An easy way to remember the patterns is to use the W, A, S, and D keys to type out the pattern based on their locations as it happens. Then you just have to read it from your chat box as you click.

There is an add-on available known as Ogri'Lazy that allows you to input the patterns. The nice thing about this is that it removes the icon if you get the right answer. http://www.wowinterface.com/downloads/info7167-OgriLazy.html

The relics are able to see through stealth; when stealthed around them they display the blue 'eyeball' icon.

Note that the Apexis relics can be disastrous to attempt to use by a player who is suffering high latency. If so, they may see the emanations from the relic strike down on the pedestal simultaneously instead of sequentially, making it impossible to determine the proper sequence. It is advised that operating these relics only be attempted in good network conditions.

[Divine Shield] and randomly and rapidly press different color relics while not getting damaged. This can work if you completely forgot your combination and only have a few left to go.