Not to be confused with Aponi Tallmoon.

Aponi Brightmane is a tauren paladin and the founder and leader of the Sunwalkers. In Legion, she joined the player as a follower of the Knights of the Silver Hand in its final stand against the Burning Legion.

In Cataclysm, tauren became an eligible race for the paladin class. Brightmane was introduced as the leader of the Sunwalkers after (re)discovering the powers of An'she.

In World of Warcraft, she was a level 55 tauren found on Elder Rise in Thunder Bluff.

Initially a warrior of the tauren tribes, Aponi Brightmane was sent to Icecrown during the war against the Lich King. There, she sustained a grave injury that rendered her unfit for combat and was sent back home to Thunder Bluff, much to her disappointment as she truly wanted to help her people and the Horde during the war. It was during this time that she and her friend Tahu Sagewind started to ponder upon the nature of the Earth Mother and how tauren have been druids since the start of time. However, all they know about druidism is from the teachings of the night elves, which are creatures of the night. The other eye of the Earth Mother An'she - the sun - was however completely forgotten. As Tahu realized this he pondered what could happen should tauren start to harness the power of the sun granted by the second eye of the Earth Mother. It was this small realization what sets in motion the genesis of the tauren priests and paladin order. Tahu ended up abandoning his druidic path and became the first tauren priest, while Aponi abandons her warrior ways and became the first tauren paladin, in an order now known as the Sunwalkers. 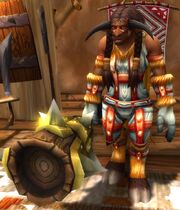 During the Elemental Unrest, Aponi defended Hunter Rise from the elemental attacks.

After the Cataclysm, Aponi became a paladin trainer and instructs young tauren sunwalkers.

After the disaster at the Broken Shore, Aponi Brightmane convened with the leaders of Azeroth's other paladin orders in Dalaran, such as Maxwell Tyrosus. At Light's Hope Chapel the paladin Order Hall was created and with the signing of the Libram of Ancient Kings a new champion was chosen to lead the Order of the Silver Hand into battle against the Burning Legion.

Aponi Brightmane later urged to close the demon portal at Felblaze Ingress in Azsuna.[2] Lord Grayson Shadowbreaker then reported that he's received no word from Aponi Brightmane, Delas Moonfang and Arator the Redeemer - who joined her in her mission - since their departure.[3] Fearing the worst, the champion traveled to Azsuna to locate her only to find her libram. It was lacking several pages of story, making it hard to find out what fate befell them. After defeating the commander of the forces defending the portal in Felblaze Ingress, in a daring leap of faith it becomes clear the demon fortress of Niskara lays behind the portal. Here, Aponi Brightmane is trapped in a cage.

Aponi discovers that the Burning Legion is planning to launch a full-scale assault on Netherlight Temple in which supposedly the Prophet Velen is to be ended. In Niskara, they also discover Lothraxion, High Commander of the Grand Army of the Light, who was held prisoner at Niskara by Balnazzar.

At Netherlight Temple, Aponi Brightmane as part of the Order of the Silver Hand, aids the priests when their temple is assaulted by Balnazzar. 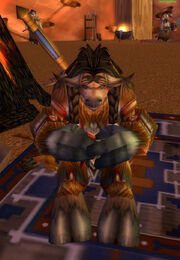 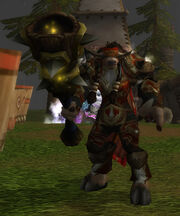 The light of the Sun illuminates the path to wisdom. Where shall we walk today, friend?

May the Sun's light protect you, <class>.

This is awful! I shouldn't be sitting here, useless, when there's so much to be done! If only my arm hadn't gotten injured up in Northrend... No use dwelling on it, though! Tahu will have me patched up and cured eventually, and we'll still help around here in the meanwhile.

Just because we're not at the front doesn't mean we can't help out somehow.

It is an honor to fight by your side, and with your permission, I would like to continue fighting for the Order of the Silver Hand.[4]

Every day I learn more about the Light and its purpose in this world. And yet, I am still so far from the truth.