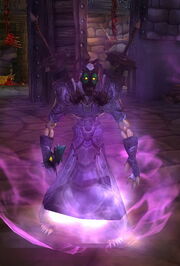 Apothecary Hummel is a boss found in Shadowfang Keep, during the Love is in the Air event. He fights along with Apothecary Baxter and Apothecary Frye.

Apothecary Hummel deals "perfume damage" (purple aura) while Apothecary Baxter deals "cologne damage" (green aura). Each boss has a short-range aura, and a channeled frontal cone attack. Each also occasionally casts "Chain Reaction", a 3-second cast that does a (physical) PBAOE (not sure if this can be interrupted). Apothecary Frye randomly tosses vials of both perfume and cologne which create color-coded damage zones on the ground, dealing damage unless you are wearing the matching neutralizer. Frye is 'untankable', but can be stunned (unsure about snares and other CC).

All three bosses do minimal melee damage, and so can be "tanked" by any class. Wearing the appropriate neutralizer (found on the nearby table) negates all of the bosses' damage except their melee and the "Chain Reaction" PBAOE. Hummel and Baxter should be separated and faced away from each other, so that the others in the group are only hit by one or the other at a time. Frye should be ignored until the other two are dead; melee attackers will have to chase him down if they cannot stun or snare him.

Combat pets are not affected by the poisons: it was quickly shown that they could not survive very long if they were, and this had to be hotfixed out a few days into introducing the boss in 2010.

Originally, weak adds called Crazed Apothecaries also spawned throughout the fight, and would run in and self-destruct for about 2500 damage after 5–10 seconds. These could be killed if they were causing trouble for the healer, although high-DPS (or high-healing) groups would largely ignore them. They were removed from the fight when it was updated for level 85.

If, for some reason, you insist on doing this with one tank, you should use cooldowns to kill Hummel as quickly as possible, and try to CC Baxter until Hummel is killed. Once Hummel is killed, everyone switches to the green neutralizer and gangs up on Baxter.

All party members begin with Purple Buff on, once Hummel is downed switch to Green. Frye will throw both colors so all members avoid poison, poison is what will wipe groups. Once Hummel is down, go for Baxter. Once these two are down, Frye is more or less soloable if one stays out of poison.

The random mobs mentioned earlier self-destruct for fairly decent AoE damage, if your healer is having trouble, pick a ranged dps to focus on these.

And remember, POISON WIPES GROUPS. Other than that, the encounter is quite easy.

Gossip
Due to the, ah, "misunderstanding" in Dragonblight, we've had to relocate our facilities to this decrepit mess of a castle.
Still we've now plenty plenty of space and time to work on various new and lovely... products...

Aggro
Did they bother to tell you who I am and why I am doing this?
...or are they just using you like they do everybody else?
But what does it matter. It is time for this to end.

Calling Apothecary Baxter
Baxter! Get in here and help! NOW!

Hummel will drop one necklace per kill:

The first time each day a level 50-60 player kills Hummel, a

[Heart-Shaped Box] will also drop for each group member. The box will hold 5-10

[Love Token] and may have one of the following items:

Below level 50, players will instead receive the

[Heart-Shaped Carton], which contains all of the above items with the exception of the mount.

The Big Love Rocket and the pre-Cataclysm versions of the rare items formerly dropped off of Hummel himself, in a system identical to the original Coren Direbrew, Headless Horseman, and Lord Ahune encounters.

As well, the first time Hummel is defeated each year, he drops a

To check whether Hummel has been killed today, copy and paste this command into the chat window:

If a "true" appears in the chat window, Hummel has been killed today; "false" indicates the opposite.