Apothecary Jerrod is a Forsaken quest giver located at Garren's Haunt in Tirisfal Glades. He stands next to his assistant, a leper gnome named Apprentice Crispin.

Jerrod is present in a cave in Arom's Crossing in Drustvar during the Horde's invasion of the region, alongside Apprentice Crispin; both can be slain by Alliance players. 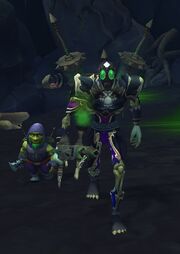 Apothecary Jerrod and Apprentice Crispin during an Assault on Drustvar.

What is it I can do for you?

Who's the little guy?

Sure, he's not been plagued in the same manner as we have, but he is clearly plagued nonetheless. He's bent the knee to Sylvanas, so he's as much one of us as you or I.

And just between you and me... to be perfectly honest, I think the Dark Lady thought he was already bending his knee when he entered her chamber!