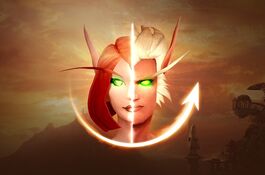 An Appearance Change is a paid service that lets the player change an existing character's appearance. It includes an optional name change, essentially incorporating the Name Change service.

The service was removed in patch 9.0.1 as all of its options — including the ability to change a character's gender — had been integrated into the in-game barbershop.[1]

The service allows the player to adjust all appearance-related options for the character, including gender, face, skin color and racial options such as tusks, horns, and tentacles (where appropriate).

The player may also choose to rename their character.

The following terms are from the Appearance Change Information, transcribed July 21, 2018.