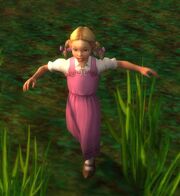 Honeywell as a young girl in Tarren Mill

Apprentice Julie Honeywell is a young mage[citation needed]  apprentice previously found in Southshore of the Hillsbrad Foothills. Since the Cataclysm, Julie is nowhere to be seen and was likely killed in the Forsaken plague bombing of Southshore.

She has previously appeared in Old Hillsbrad Foothills as youngster Julie Honeywell.

During the Horde quest

[13] No Escape, a previously unknown young woman named Sophia Zowski can be seen amongst the Hillsbrad refugee leadership.[1] Julie bears a remarkable resemblance to Sophia — who has never appeared in pre-Cataclysm Southshore — and it is possible that Julie has taken an assumed name. Also, Julie was the only female NPC in Southshore to be seen wearing mage robes.