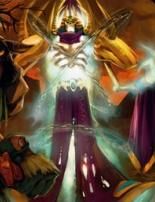 Araj's Phylactery appears in place of his corpse.

Araj the Summoner, the former leader of the Scholomance,[1] is the ruler of the Ruins of Andorhal in the Western Plaguelands.

Araj the Summoner was a lich in the service of Ner'zhul, the Lich King, who became regional commander of Scourge forces in the Western Plaguelands. It is known that he was the former leader of Scholomance before aiding the Scourge invasion of Caer Darrow and later claiming the city of Andorhal as his own.[1]

Headquartered in the ruined city of Andorhal, Araj had two primary responsibilities: spread the Plague of Undeath via massive Plague Cauldrons situated at various points throughout the area, and continue to pound at the Forsaken defenses at the strategic pass known as the Bulwark. These duties kept him busy for some time after the end of the Third War, but ultimately it was the spreading of his resources that spelt his doom. Considering the Forsaken to be the most necessary target of Scourge forces, he left his southern flank far less guarded than was wise, perhaps not considering an Alliance incursion likely.[citation needed]

Subsequent to the fall of Arthas Menethil as the Lich King, Araj commanded the scattered remains of the Scourge forces still present at Andorhal. This persistence sealed his fate, however, and Araj was slain by adventurers seeking to conclude the long stalemate during the Battle for Andorhal. A shard from his phylactery was taken.