The aranasi are a race of arachnid demons.[1][2] Their origins are not fully understood - scholars who have studied the Burning Legion speculate that they are the remnants of a forgotten race on a world long ago conquered by the armies of Sargeras.[3]

Some aranasi appear to look like typical spiders, while others have a partially humanoid appearance resembling nerubians or fire spiders, and some have an even more humanoid appearance, standing on two legs with wing-like structures on their backs. At least some aranasi have potent venom sacs that secrete violent toxins.[1][4]

Pools of an orange fel-like substance can be found in their lairs, though what this is is unknown. Near the Lost Temple it is "slag" (Cooling Slag Globules come from it), but unrelated to the aranasi. 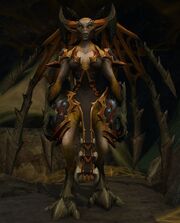 An aranasi in World of Warcraft.