Not to be confused with Arator the Redeemer.

Arathor (or the Arathorian Empire,[1][2][3][4] Arathi Empire,[5] and the Empire of Arathor)[6] was the first great human nation founded by the unification of the various tribes of the northern reaches of Eastern Kingdoms under the Arathi. Its capital was the city-fortress of Strom, now known as Stromgarde. 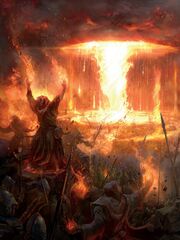 Human magi unleashing their powers on the Amani in the Troll Wars.

Concerned that the trolls were becoming too great a threat, the Arathi tribe of humans embarked on a campaign to conquer their rivals through combat and politics. After victory, by offering equality and peace to the people they conquered, the Arathi were able to form a powerful nation, Arathor. The capital of Strom was built, and the humans in the continent that would later become Lordaeron traveled to its protection.[7]

The high elves of Quel'Thalas, meanwhile, were in open war with the trolls. On the verge of defeat, they sent ambassadors to Strom to plead for assistance from the human king, Thoradin. In exchange for support, the elves agreed to instruct one hundred humans in the use of magic. Through the military might of Strom, and the magic wielded by the elves and new human mages, the trolls were soundly defeated. This great conflict, and first large scale war in the Eastern Kingdoms, was later dubbed the "Troll Wars".[7] To thank Lordain for his sacrifice, the humans named the continent Lordaeron in his honor.

Caer Darrow has been the site of one or more human fortifications dating back to the days of the empire.[citation needed]

Following the defeat of the trolls, the human mages that had been instructed by the high elves eventually chose to leave Strom and found their own nation, Dalaran, dedicated to the study and use of magic. In time, other city-states were founded: Gilneas, Alterac, and Kul Tiras. Much of the nobility decided to move from Strom to the fertile lands of the north, founding Lordaeron, while the heirs of King Thoradin traveled far south to form the kingdom of Stormwind. The few remaining loyal defenders of Strom renamed it Stromgarde thus creating the Kingdom of Stromgarde, a shell of what was left of a once-great empire.[8]

The human nations that splintered off from Arathor would not be united again until the Second War, in which the Alliance of Lordaeron was formed to defeat the Orcish Horde. Lord Anduin Lothar, as the last descendant of the Arathi, was able to call upon the humans of Lordaeron as well as the high elves to join this new alliance of many races in payment for the help provided by the humans of Arathor during the Troll Wars.[2] 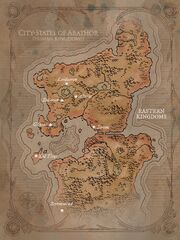 The city-states of Arathor (Stormwind and Lordaeron would be founded at the end of Arathor's reign).

For thousands of years after the Sundering, the human tribes teetered on the brink of extinction as their numbers were winnowed by an ever-increasing struggle simply to gather what was needed for survival. For millennia they persevered, wandering ever further afield in search of food, wood and refuge. Finally, the clouds parted. The sun returned and green sprouts pushed through the ash-fertilized earth of the sere plains. The surviving tribes of humans sent out intrepid bands to explore the reborn world and to find their long-lost brethren. Slowly, trade routes were established across the revitalized world. However, the savage trolls had survived their own hardships and emerged to once again attack the human merchants and travelers. Soon the trolls were bold enough to raid settlements, pillaging the towns and taking away slaves and fodder for their heathen rituals. Around -2,800 BDP, the strongest of the human tribes, the Arathi, convinced the scattered threads of humanity to gather under their rule and wove them together into the empire of Arathor. Though some tribes chafed when their destinies were bound together, the Arathi assured them the land would always belong to all peoples and named the land as a whole in homage to their ancient ancestors: Azeroth.

Together, the humans constructed the fortress city of Strom and raised an army that pushed back the trolls. Yet raids by the trolls continued to prevent any large-scale farming and remained a danger to anyone traveling outside the empire's protection. The leaders of the tribes gathered in Strom to try to conceive a strategy when word came of an elven emissary at the city gates. The stunned humans, who had long believed all the elves destroyed in the defeat of the Burning Legion, were quick to bring the envoy into their council. The envoy explained that long after the destruction wrought by the Sundering, some of the survivors had made their way to northern Azeroth and established a new kingdom, called Quel'Thalas, and a new source of magical power, called the Sunwell. She also told how the elves were waging their own war with the trolls and how the elven defenses were perilously close to falling under the onslaught. The elves requested assistance from the army of the human empire to stave off an oncoming assault that threatened to shatter the borders of the elven nation. After discussion, Arathor agreed to help Quel'Thalas — but required that the elves taught humans the ways of magic and sorcery. The elves were quick to agree, and the combined elven and human forces drove back the trolls on both fronts until the bestial tribes held a mere shadow of their former power.[9]

With the threat of the trolls removed, the humans spent the next centuries expanding their borders until the Empire of Arathor nearly covered the continent. As their lust for power pushed them to master the arts of magic they were learning from the elves, so did their lust for land, pulling them southward into the mountains. There, they encountered a dwarven expedition gathering supplies, and the two peoples met for the first time.[9]

The clans of Khaz Modan and the humans of Arathor met under a bright sun, and soon became close allies. The humans provided the dwarves with a wide array of surface goods, and the dwarves traded the finished goods produced in their underground workshops. Passing through the dwarven lands in peace, the humans expanded their empire into the southern half of the continent. They would also name the northern half of it with a combination of words from the human, elven, and dwarven languages: lorn, dwarven for "land"; daer, the human word for "people"; and ronae, "peaceful" in the elven tongue — hence, Lordaeron. All the races thought it was the dawn of a second great age; they would soon learn, to their sorrow, that it was already close to twilight.[13]

After beginning to use arcane magic, the humans noticed that demons were showing up on their territory, so the humans quietly went to the high elves and told them what was happening. The elves told them about how the use of arcane magic attracted the Burning Legion's attention long ago. Obviously the Legion was still drawn to it, so the high elves explained that as long as humans continued to use arcane magic, demons would keep showing up. The humans and high elves then agreed to create the Guardian of Tirisfal to fight against the demons that were inevitably going to appear.[14]

As they quickly embraced the ways of magic, human mages rose in power until they matched and even surpassed their elven tutors. In parts of the empire, human sorcerers cleared fields, hunted dragons and reshaped the earth itself at their whim. To many across Arathor and to some on its ruling council, this seemed at best a too easy path and at worst an abuse of a sacred power. Confronting the wizards took the Empire of Arathor over the brink of civil war as the "magocrats" carved out their own territory where magic could be practiced without restriction. In some places, those fearful or distrustful of magic banded close to one another to prevent the mages from taking power, while others compromised and allowed the free use of magic so long as it was policed by overseers.

When all was said and done, around -1,200 BDP, the sprawling Empire of Arathor had grown too large, and civil unrest had make it to fall apart into seven separate nations: Lordaeron, Stormwind, Kul Tiras, Stromgarde, Alterac, Gilneas, and Dalaran.[15]