For the building option in Talador, see Vol'jin's Pride and Fort Wrynn.

Arcane sanctums are mystical buildings built by the Alliance and the high elves as well as the blood elves. Arcane sanctums replaced the mage towers of the First War and Second War. A huge astrolabe is situated on top of them.

The sanctums of Quel'Thalas were used to provide energy in the absence of the Sunwell.[1] At the time of the invasion of Outland arcane sanctums functioning at full capacity were in short supply and Silvermoon had to protect them.[2]

Tutored in the Halls of Magic at the mystical city of Dalaran, sorceresses and priests diligently study their mysterious arts within the depths of the arcane sanctum. Over time, continuous study provides additional reserves of mana and the mastering of ever more difficult spells. It is also here that magical sentries may be called to allow the human towers to detect invisible enemy invaders.

The arcane sanctum helped the high elves to fend off Arthas and the Scourge as he tried to attack their capital city of Silvermoon City and Quel'Thalas in Warcraft III: Reign of Chaos by training units. However, the arcane sanctum couldn't be built by the high elf worker unit likely due to the limited ability of the map editor prior to the Warcraft III: The Frozen Throne expansion. With the addition of the The Frozen Throne expansion's map editor, it is possible to make additional groups with building orders. 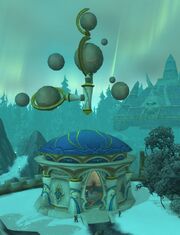 With the introduction of the blood elves in World of Warcraft, the arcane sanctum officially entered the game at the following locations: