The Arcatraz is the third wing of the Tempest Keep instance and is a prison where the naaru jailed the most terrifying and dangerous creatures they encountered on their journeys. Among the inmates of the Arcatraz are agents of the black dragonflight, demons of the Burning Legion, and even servants of the mighty Old Gods. When Kael'thas and his followers took the Keep, he sent a warden and guards to the Arcatraz. Kael's blood elves, however, were corruptible and the prisoners have begun to break free...

As with the other Tempest Keep instances, every member of the group needs a flying mount (or flying form, if a druid) to reach the instance entrance. If you cannot fly you may be summoned by a Warlock instead; the minimum level to enter the instance is 65. One full run yields about 1800, and one full heroic run yields about 2500 reputation with the Sha'tar.

With Outland serving as the strategic battlefront in the ongoing Burning Crusade, the naaru recently used Tempest Keep to reach the shattered land. However, when the naaru set out from their stronghold, Prince Kael'thas and his blood elves quickly raided the dimensional fortress and assumed control over its satellite structures. Now, guided by some unknown purpose, Kael'thas manipulates the keep's otherworldly technologies, using them to harness the chaotic energies of the Netherstorm itself.[1]

Arcatraz served as a prison for the most dangerous beings the Sha'tar came across in their travels.[2] However, the Old God servant, Harbinger Skyriss, corrupted Warden Mellichar and made him release many of the prisoners.[3]

As the forces of Azeroth invaded the Legion's home base, Argus, they discovered that the demons had gone to the Arcatraz to free High Inquisitor Raalgar, an inquisitor who was immortal because of the Fel Heart of Argus. The Fel Heart of Argus tied Raalgar to the fel of the world via Argussian Heartwells that led directly to the core of the planet.[5] Grand Artificer Romuul sent an adventurer to the Arcatraz to stop Raalgar from being freed, but the inquisitor successfully returned to Argus.

Although years had passed, the Arcatraz Sentinels were still active and fighting the Legion's presence. An eredar Felshadow Seeker commented that Zereketh the Unbound's Void magic still lingered as well.[6]

The mighty Tempest Keep was created by the enigmatic naaru: sentient beings of pure energy and the sworn enemies of the Burning Legion. In addition to serving as a base of operations for the naaru, the structure itself possesses the technology to teleport through alternate dimensions, traveling from one location to another in the blink of an eye. 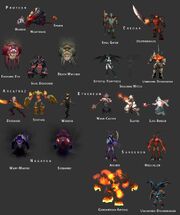