For the title, see Archmage (title). 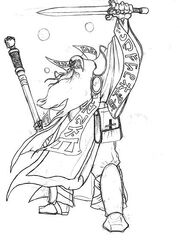 Archmagi (or arch magi and archmagus (singular)) are a type of powerful caster that represent the pinnacle of magical power. Most archmagi hail from the magical kingdom of Dalaran but can be found among other groups as well. Weaving their intricate enchantments, these mages defend their people with all the magical powers at their disposal. Mounted atop their trusty steeds, the archmagi brandish magical blades and ancient staves that serve to channel their fierce energies in battle. Though gruff and slightly aloof, these experienced wizards are a heartening sight upon any battlefield where the fate of humanity lies in peril.[1]

In Warcraft III, the archmages had the following spells:

Archmages can come from any arcane caster class as long as they have a sufficient level of arcana and spellcraft knowledge. They must have the ability to cast arcane spells and spells from at least five of the schools of magic at a certain level of proficiency. They must also spell focus in two schools of magic. Archmages of the Kirin Tor forbid warlocks and necromancers from their ranks.[2]

Archmage is a class mentioned in the Dungeons and Dragons: Warcraft: The Roleplaying Game which exists in the world of Warcraft. Though incorporated into the Warcraft RPG it is detailed only in the DMG (Dungeon Master's Guide). Characters with this class appear in Lands of Conflict and Shadows & Light.[3][4]

In World of Warcraft: The Role Playing Game, the generic archmage class was replaced with the Archmage of Kirin Tor prestige class, which included a Warcraft lore description. Note that the term "Archmage of the Kirin Tor" can and has been properly shortened to simply "archmage" in lore text. The term archmage can also be used to describe archmagi that are not members of the Kirin Tor.

Archmage in World of Warcraft

In World of Warcraft, an archmage appears to be an honorary title given to a powerful mage (usually the most powerful within some faction or organization). The leader and some members of the Kirin Tor in Dalaran are usually given the title of "Archmage". Throughout the history of Azeroth there have been many archmagi. Just being named an archmage doesn't make a mage extremely powerful, but most are not to be trifled with.[citation needed]