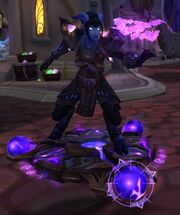 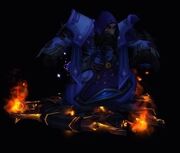 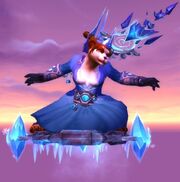 Archmage's Prismatic Disc is a flying disc mount obtained by mages. The mount's appearance changes based on specialization.

This mount is a quest reward from

Three elements have been fused to create this magical disc, which is attuned to your specific magical powers.

Long before the destruction of the Dalaran during the Third War, Antonidas was working on a secretive project with three of his close friends. Unfortunately, the project was hard to finish and would be abandoned after his death.

In the present day, Invoker Threadgold informs the Archmage that Kalec wants to take to him. Kalec informs the Archmage that he had found a journal belonging to Antonidas. Reading the journal, Kalec finds out a project that Antonidas had been working on. A disc that could attune itself with the riders magical specialty. Unfortunately, he was unable to finish it and gave all three of the pieces to his closest friends.

Archmage Celindra was the one entrusted with the arcane piece. She is the only one that still owns her piece and gives it to the Archmage willingly.

Khadgar was the one entrusted with the fire piece. The piece was given to him when he was still at Karazhan as Medivh's apprentice. Since he was working Archmage Alturus, he might know where it is. Going to Alturus, he speaks about how he and Khadgar were studying it in his sanctum. Unfortunately, The Master's Cellar was taken over by the Legion and the only portal leading to the sanctum is located there. Making his way into the Cellar, the Archmage fights and sneaks around the area until he finds the portal. Going inside of it, he finds the empty sanctum with the fire piece in the middle.

Archmage Cedric was the one entrusted with the frost piece. He is currently located at the Dalaran Crater. Going to him, the Archmage is informed that it was stolen by ogres. The ogres of the Crushridge clan stole the disc and returned to their capital. Going their himself, the Archmage finds the price of frost on Ok'rok Icetouch. He kills the ogre and retrieves the piece.

With the excess energy defused, the discs align and infuse into one.