Archmage Lan'dalock is a high elf quest giver located at the Violet Hold (outside of the actual instance) in Dalaran. He offers the weekly raid quests to players. Prior to patch 3.3.0, he and Archmage Timear gave random daily quests for dungeons. See Daily quest for the quests he once offered.

During the assault on the Firelands, Archmage Lan'dalock can be found in Mount Hyjal assisting the player in fighting elites in the daily quest,

The Purge of Dalaran

During the Purge of Dalaran, Lan'dalock and two Silver Covenant enforcers guarded the entrance to the Violet Hold, where the captured or surrendered Sunreavers were being held. It is possible for Horde heroes to be banished to the hold's entrance by Jaina Proudmoore during Grand Magister Rommath's assault on the city, in which case players will fight and kill Lan'dalock to secure their escape. During the battle, Lan'dalock will summon illusions of the various bosses he once tasked players with defeating during the Wrath of the Lich King era.

Rise of the Thunder King

Archmage Lan'dalock makes an appearance on the Isle of Thunder, making his optional death during the Purge of Dalaran non-canon. He is tasked to dismantle the presence of the Zandalari trolls at Za'Tual. 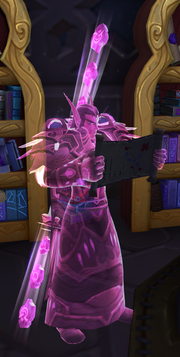 It is revealed that Lan'dalock had a liaison with Matron Mother Malevolence before he joined the Kirin Tor.[1] The Illidari use this to their advantage and secure his help in breaking into the Black Temple.[2]

[Seal of Broken Fate] for

The subject of this section was removed from World of Warcraft in patch 3.3.0.

Amongst the Kirin Tor, it is my duty to see to the strategic interests of the magocracy.

There is much yet to be done this week. Will you assist me, <name>?

Dalaran during the Purge

Looking for a Seal of Broken Fate?

<The archmage's face goes red as he chokes out a cough and looks around surreptitiously.>