For the neutral quest of the same name, see 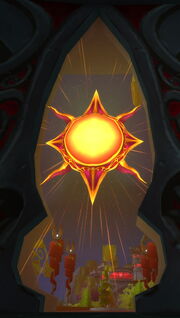 Archonisus is the third and final of the gates guarding the Sunwell in the raid instance of Sunwell Plateau. It is found after

M'uru has been defeated, and blocks the path leading to

On the PTR, the three gates were opened by handing in a quest, although now they will open by themselves over time. Archonisus opened on US servers after an extended maintenance on May 20, 2008.

Problems with the Gate

In January 2010, many realms began experiencing a bug where this gate would remain locked after M'uru was defeated, preventing access to Kil'jaeden's chamber. The current solution to this bug is to petition the GM for a fix, post a request for help on the WoW forum thread about it, and have all raid members exit the instance for 30 minutes (raid members who log out inside the instance will prevent the soft reset from working).

Sunwell not able to be completed Bug reports for this gate should go in this thread
Retrieved from "https://wowpedia.fandom.com/wiki/Archonisus?oldid=5577713"
Categories: