Ardenweald, sometimes referred to as just the weald,[1] is a realm of the Shadowlands founded by the Winter Queen and inhabited by the Night Fae Covenant. An enchanted, mystical forest of rest and hibernation, Ardenweald is where Wild Gods and other spirits of nature travel upon death. Giant dream trees across the forest draw in anima, which is then used by the Night Fae to rejuvenate the spirits as they slumber inside wildseeds and prepare them to be reborn into the world of the living.[2][3][4][5] At the Grove of Awakening a portal is maintained to ferry souls back to their worlds[6] sustained by four focuses;[7] when it is time for a soul to be reborn, they are brought the grove to return home and begin their cycle anew.[8] In the early days of Ardenweald, it was just Marasmius and the Winter Queen,[9] but as she developed the trees, the tirnenn came to be alongside them and helped build the groves.[10]

Each dream tree has a name, and each grove has a tree. The grove of Hibernal Hollow has Tirna Glayn, the grove of Tirna Vaal gets its name from its tree, Tirna Noch fell earlier in the drought, Tirna Rowen of Heartwood Grove perished recently and has not had a wildseed for quite some time,[11] the grove of Claw's Edge has Tirna Kaithe, the grove of Glitterfall Basin has Tirna Eas, the grove of Dreamsong Fenn has Tirna Fenn, Tirna Scithe is particularly dangerous, and Tirna Marwol in the Darkreach were lost long ago prior to the drought.[12]

The vast forests of Ardenweald serve the natural aspects of life and death. Its wilds are a sanctuary for the great spirits of nature that seek respite and renewal before awakening to join the cycle anew.[13] Ardenweald and the Emerald Dream are opposite blooms connected to the same tree. If the Dream is the personification of Life in the waxing stage, then Ardenweald is life when it is waning.[14]

Ardenweald serves as an afterlife for mortal souls who shared a close bond with the natural cycle, like druids and hunters. Upon arrival, these souls can choose an animal form infused with Ardenweald's celestial magic and spend an eternity caring for the wilds.[5] This ability is called the Boon of Shapes, originally granted by the Winter Queen to the first mortals that the Arbiter assigned to Ardenweald.[15] In exchange for this boon, souls give a part of their anima to the forest.[16]

Ardenweald can be compared to the Emerald Dream, to which it has an ancient link that has existed since before the fracturing of the Pantheon,[17] but where the Dream represents the spring and summer of the cycle of life, Ardenweald reflects autumn and winter.[2][3] In essence, the realm is the highest expression of the relationship between endings and beginnings—between Death and Life.[18]

Ardenweald is where the demigod Cenarius recovered after his death during the Third War, before returning to Azeroth during the Cataclysm.[2][3] Recently, Ardenweald has suffered more keenly from soul-drought than any other realm in the Shadowlands. For the first time in endless ages, the Night Fae's Winter Queen must choose which of the land's formerly lush groves—and which souls—will be fed the last precious drops of anima and which will fade away forever.[4] In addition, Ardenweald is also under attack by the Drust,[2] who are invading from their realm of Thros in order to use the rebirth mechanisms of Ardenweald as a means to escape their fate,[5][19] though they had invaded before long ago.[20] Only Marasmius and a few fae recall that the Drust had invaded before, most believing them to be legends and stories to scare young fae.[9][21][22]

The waters of Ardenweald carry deep power that most have forgotten, except the tirnenn.[23] Ardenweald is in perpetual twilight, and is illuminated by "gormgris" from gorm for the sake of visitors.[24] The majority of the equipment, weapons, and tools are made in Tirna Eas:[25] armor of the night fae is made from the husks of gorm that soak in the waters of the Banks of Life,[26]the weapons and tools of the night fae are made from gorm claws and stingers[27] at the Growthworks.[28] Ardenmoth scales are also a primary material for fae armor.[29]

All of the mushrooms and fungi that spread across Ardenweald are a part of a great sentient fungus, Marasmius, who spans the scope of the entire zone.

As of Ysera's reawakening and binding to Ardenweald, she has begun having visions of Tyrande Whisperwind being consumed by vengeance, Ardenweald's destruction, and that she has a role to play in both defending the weald and saving the night elves trapped in the Maw.[30]

Ardenweald is described as "perpetual twilight"[31] and a "moonless night",[32] but is also described as being in moonlight.[33] Additionally, the zone has an "Other Side" accessible through the Dream Catcher (item).

“Although we’ve created lots of cool forest zones in the past like Val’sharah, Ashenvale, and Hyjal, Ardenweald is higher concept, more unreal world than we’ve explored so far.” 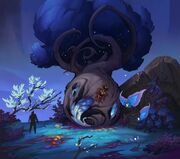 According to art director Ely Cannon, Ardenweald is inspired by a piece of old, unused concept art that the art team found during the development of Shadowlands and which depicted a forest with specks of starlight on the ground.[34] Cannon has also stated that the concept of a celestial canopy with stars originated from a brainstorming session for Thros, the Blighted Lands in Battle for Azeroth.[35] The developers initially wanted to include this theme as part of Bastion, thus splitting the zone between a light, heavenly side and a dark, celestial forest side, but they eventually decided that the latter idea was unique and interesting enough to deserve its own separate zone.[34]

When designing Ardenweald, Blizzard's artists decided to not include any traditional architecture and instead focus on using the forest's natural elements to create the setting. They were partially inspired by the treetop arakkoa structures in The Burning Crusade. However, since these areas could often make navigation and gameplay difficult for players, they strived to instead keep Ardenweald's structures and areas open-air. Since the trees and groves are what make up the villages of the Night Fae, the artists managed to avoid the necessity of typical buildings and ended up not using any real-world references, instead leaning on their love of folklore, fairy tales, and the work of fantasy artists like Brian Froud.[18]

Ardenweald's connection to the Emerald Dream was important to the team, who used every chance to create something similar but with different colors and shapes to convey Ardenweald's distinct purpose. While the Dream (as portrayed in Legion) is bright and vibrant, Ardenweald is somber and tranquil, with blue and purple colors and smooth, swirling shapes designed to create the feeling of a "celestial nursery" where nature spirits, generally termed Wild Gods[36] come to rest and be at peace. The cool color palette immediately reminds viewers of night time; the sky's color was based on reference photos of deep blue and purple skies taken in northern England.[18][37] Ardenweald's different seasonal states—like the fully deteriorated anima-deprived areas and the in-between states where areas are starting to go into fall—was one of the ways the artists tried to make the zone feel different from the game's other forest zones.[35]

From the beginning, the artists pictured Ardenweald as a cosmic space that combined the celestial look of galaxies with natural tree canopies, which led to the design of the towering dream trees that dominate the forest. An early discussion about the zone's ecology and the decomposition process led to the invention of the gorm, creatures which ended up becoming fairly central to the zone's storyline. Early in the design phase, the artists knew they wanted to distinguish Ardenweald's inhabitants (such as the vorkai) from other creatures they'd designed in the past by giving them a wild feel and more animalistic features.[18]

The artists normally try to ensure that a zone's environment feels natural and well-thought out, such as thinking about where a body of water is coming from or deciding if a mountain is shaped by erosion or tectonic shifts, but in Ardenweald's case they allowed themselves to include a few supernatural details, such as water pouring into a pond from a tree canopy, specifically because they wanted the zone to feel magical and outside the boundaries of the natural world.[18] The artists created several new particle effects for the zone, including a brand new water type, weather systems where an "anima rain" is happening, leaf effects, as well as dust and debris effects to give the anima-starved areas a sense of disintegration and deterioration.[38]

The anima branch latticework found throughout the zone was designed by environment artist Gabriel Gonzalez, who wanted to establish the branch-like lattice as a defining shape for Ardenweald. The lattices were designed to have some heft but also convey the elegant and magical way in which Ardenweald's inhabitants shape their environment. The shapes were inspired by Art Nouveau jewelry and the 1982 film The Dark Crystal. The zone also contains tree roots shaped together to form archways. The idea for these was that they were constructed by the tirnenn, who stick their arms into the ground to force roots out of the ground. The flowers of the zone are the result of the artists being allowed to create their own ideas of the perfect fairy tale flowers by combining parts from different real-world plants.[18]

Ardenweald's soundscape was created by sound supervisor David Rovin, who wanted the sound to capture the zone's story—a land of rebirth and gentleness whose magic is cool and tempered, but which turns dry and brittle when said magic is absent. Rovin gravitated to the world "astral", which carries connotations of contemplativeness and stillness but also spirituality. He started from organic sounds like birds, chimes, and wind, which have an innate tonality that match the zone. These sounds also help create contrast with the dead areas that have been deprived of anima and have more earthy timbres like dirt, dry winds, and twigs.[18]