Area of Effect, or AoE, are spells which affect more than one target within a pre-determined radius set by the game's mechanics. These effects range from HoT spells to DD spells and cover all points in between. Traditionally (as far as MMORPGs go), the anchor target (location at which the caster is aiming the spell), and those closest to that target, are affected the most by the AoE effect, with diminishing returns as the spell radiates outward. In World of Warcraft, most area spells are GTAoE or PBAoE, and all targets in the area suffer the full effect.

There exist a various amount of AoE spells in the game and they can all be put in the following categories:

Some AoE effects are cast or used without having to target someone or something; the caster is the anchor for the spell. The effect/damage radiates outward from the caster up to a given range, affecting all targets, or the first given number of targets the expanding 'ring' impacts. These types of spells are referred to as PBAoE, which stands for Point Blank Area of Effect.

Caster classes that are weak physically tend to have powerful PBAoE spells (if granted by their class). These sorts of spells require them to be right next to multiple hostile targets, so the spells are designed to be worth the danger. Melee- and tank-type classes are usually designed to take damage from multiple targets, and as such their PBAoE-type abilities tend to be very weak.

The perhaps most versatile version in WoW is the mage spell

[Arcane Explosion]. A mage can run into the middle of a group of otherwise distracted mobs (perhaps by a tank holding their aggro) and start blasting away (or just start blasting without a tank, while a healer frantically keeps him alive). A few PBAoEs from a higher-level casters can normally take an entire crowd of weak enemies out.

PBAoE can also stand for Personal burst area of effect, indicating the effect radius bursts outward from the user. 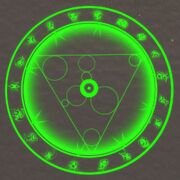 The targeting circle that appears on the ground when casting many AoE spells.

With Ground Targeted Area of Effect (GTAoE) spells, the player places a circle on the ground that will be the area of the spell effect. He carefully places this around his targets and clicks to start casting/channeling. All enemies that are in that area – or remain in that area for channeled or damage-over-time GTAoEs – suffer the damage. Some examples:

[Earthquake]. Another exception is the Shaman spell

[Fire Nova], in which no area is selected; rather the enemies around any target with the shaman's Flame Shock active on them will be damaged instantly.

Since patch 2.2.0, most area effect damage effects have an 'area damage cap' which limits the potency of the spell if used against a large number of targets simultaneously. As of patch 5.2.0, the current area damage cap is 20 targets. This means AoE spells will deal the listed damage to each target up to and including 20 targets, reaching their maximum total damage output when striking 20 targets. Against more than 20 targets, the spell will deal the amount of damage it would deal against 20 targets, split evenly among all targets hit. For example, if an AoE hits each target for 10,000 damage, it would deal 10,000 per target against up to 20 targets. Against 25 targets, however, it would deal only 8,000 damage per target, as the spell would cap at 200,000 damage done (20 x 10,000). For more than 20 targets, the damage done will be equal to (DamagePerTarget x 20/NumberOfTargets).

[Shadowflame]), rather than direct damage or a debuff from a ground-effect damage over time AoE, will not have an AoE damage cap.

[Holy Word: Sanctuary] are AoE healing spell that affects everyone in its area, and their effect per player is reduced when they heals more than 6 players. Other healing spells such as

[Tranquility] have a maximum number of targets they will affect.