Ashkandi, Greatsword of the Brotherhood 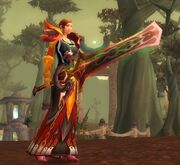 Ashkandi, Greatsword of the Brotherhood is a massive two-handed sword that has a hilt resembling the intertwined necks and heads of two red dragons. It's rumored to have belonged to Sir Anduin Lothar.[1] It is of epic quality and drops from Nefarian in Blackwing Lair.

The weapon's wicked, impossibly sharp blade only hints at the massive power contained within. It is made of thorium.[2]