Assault on the Dark Portal

The Assault on the Dark Portal (or the Tanaan Invasion)[1] is the instanced version of Tanaan Valley, which is the subzone of Tanaan Jungle and a location of Warlords of Draenor introductory experience. Once the intro is completed, players have no means of returning to the area, similar to Plaguelands: The Scarlet Enclave for death knights. The zone displays as "Tanaan Jungle" while in this instance.

Players arrive here from Blasted Lands after repelling the Ironmarch and lead a counterattack alongside Khadgar, Thrall, Vindicator Maraad and Lady Liadrin. The main goal of the Azerothian expedition is to shut down the time-space gateway, which is the newly constructed Dark Portal, leading to Azeroth.

Champions began attacking the Bleeding Hollow clan,[6][7][8] the Shattered Hand clan,[9][10] the Shadowmoon clan,[11][12] and the Blackrock clan[13] and also freeing their captives (which included: Yrel, Ga'nar, Drek'Thar, and Exarch Maladaar).[14][15][16][17] The Azeroth coalition then went on to commandeer the Iron Worldbreaker and used it to kill Iron Horde troops and destroy the Dark Portal. Grommash Hellscream accompanied by his warlords appeared on a ridge afterwards, and ordered his entire army to kill the interlopers.[18] Outnumbered, the heroes of Azeroth and the escaped prisoners retreat to the docks where they plan to escape on the Iron Horde's ships.[19] Once the danger has passed, the Alliance adventurers traveled with the draenei refugees to Shadowmoon Valley where they meet the alternate version of Prophet Velen.[20] The Horde adventurers on the other hand, traveled with the Frostwolf Orcs to Frostfire Ridge, home of the Frostwolf clan.[21]

Map of the Assault on the Dark Portal.

The Assault of the Dark Portal is a roughly hour-long directed questing experience that sends players on a counterclockwise loop of the zone. Once done, players will be awarded the

[Welcome to Draenor] achievement and sent onward to the Frostfire Ridge storyline or the Shadowmoon Valley storyline, for Horde and Alliance players respectively.

Among the unreleased quests are: 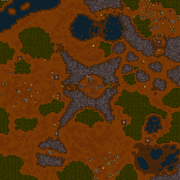 The approximate area of the assault during the Invasion of Draenor.