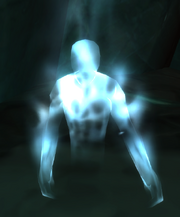 “By the moons' glow, listen. Beside the river, listen. Holding those you love, listen. To the cries of the dying, to the whisper of the wind over the silent dead...”

Astarii Starseeker was a night elf priest trainer located in the Temple of the Moon in Darnassus, and a close personal friend of Queen Mia Greymane.

During the War of the Thorns, she sent word to Tyrande Whisperwind and rallied the Priestesses of the Moon to defend against the Horde and aid in Darnassus' evacuation.[1] After healing the wounded Queen Mia, allowing her to escape with King Greymane, Astarii died during the Burning of Teldrassil, refusing to leave the Temple of the Moon in order to pray for Elune to ease the suffering of those who could not be evacuated.[2][3]

After her death, her soul ended up in the Maw, as a result of the machine of death being broken. While being imprisoned within the Tremaculum, she was rescued by mortals aligned with the Night Fae Covenant, at the urging of Ysera.[4] Following her liberation, she came to reside in the Heart of the Forest within Ardenweald.

Ardenweald gossip
When I closed my eyes, I thought the next face I would see would be Elune's.
Thank you for not giving up on us.