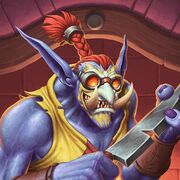 Awilo Lon'gomba is a jungle troll cooking trainer in the Filthy Animal in Dalaran.

He seems to have an obsession for cooking gnomes, believing them to be the pinnacle of flavor. In many of the daily quests he gives, the quest-ending NPC asks "are you sure its 100% rhino meat and no gnome this time?".

You here to eat, mon? Or maybe to learn cooking from the best, eh?

Awilo appears as one of the bosses that can be encountered in the Dalaran Heist single-player experience in the Rise of Shadows expansion for Hearthstone.