For other usages, see Azeroth (disambiguation).

Azeroth is a nascent titan, or world-soul, growing within the core of the eponymous planet. The Pantheon believed her to have such great potential that should she ever awaken, she would become the most powerful titan ever seen—even more powerful than the mighty Sargeras and strong enough to overthrow the void lords by herself. For this reason, Sargeras came to see Azeroth as a threat, and set on destroying her before she could be corrupted by the Old Gods.[3][4][5][6]

Azeroth's elementals are extremely violent and chaotic, because as its vast world-soul developed, it consumed much of the Spirit of the planet, which balances the elements.[7]

One day, as the titan Aggramar was wandering in the Great Dark Beyond, he heard the tranquil dreams of the most powerful world-soul the Pantheon had ever encountered, one they would later name Azeroth. To his horror, he discovered that the planet had already been claimed by the Old Gods, though the defenseless world-soul within remained as yet untouched. After Aggramar and Eonar convinced their brethren to save Azeroth from corruption, the Pantheon crafted the titan-forged to do battle against the Old Gods, before eventually imprisoning them deep beneath the surface of the planet.[8]

The destruction of the Old God Y'Shaarj, who was pulled from the surface of the planet by Aman'Thul, caused the nascent titan to bleed out. Her bleeding would be halted with magical wards by the Keepers, and the immense lake left behind when the tumultuous arcane energies calmed became known as the Well of Eternity.[9]

The Forge of Wills was constructed by the Keepers to shape Azeroth's budding sentience, while its twin the Forge of Origination would regulate the rhythm of deep earth and fortify the world-soul's form.[9]

Though some believe that Freya wove the Emerald Dream into being from nothing, others claim that this strange place had always existed in some form, a dream born from Azeroth's slumbering world-soul. It is said that Freya tapped into this realm and molded what would become known as the Emerald Dream as a way to commune with the nascent titan.[10]

The Jeweled Scepter of Sargeras is known for the gleaming jewel that adorns its apex. Many theorize that it represents Sargeras' baleful eye, which caught only a glimpse of Azeroth before the fallen titan was ripped back to the Twisting Nether. But the truth is far different.

Soon after the War of the Ancients, Sargeras had a vision: the Well of Eternity imploded, but instead of being cast back to the Twisting Nether, this time he was dragged down to the very core of Azeroth. He was there for only an instant, but in that moment, he saw Azeroth's slumbering world-soul—and in that moment, the world-soul opened one eye and gazed at the Dark Titan. He was enraptured.

Since then, the eye of Azeroth's world-soul has not been far from his thoughts. He commanded the eredar who forged the Jeweled Scepter of Sargeras to crown it with that lone, wondrous orb. Next to it, the eredar placed two nathrezim wings, a testament to Sargeras's conception of the world-soul: corrupted, demonic, and most importantly, his.[11]

When Sataiel used Ulthalesh to drain what would later become known as Deadwind Pass of life, even Azeroth's slumbering world-soul quailed. The spell ripped open a magical nexus of unspeakable force, over which the Guardian Aegwynn would one day build Karazhan.[11]

While the Pantheon had told the Dragon Aspects many things, they did not tell them about Azeroth's slumbering titan spirit. Malygos's campaign during the Nexus War to redirect ley lines and eject arcane from the planet upset the equilibrium of the world, sparking natural disasters from Northrend to the southern tips of Kalimdor and the Eastern Kingdoms. If Malygos hadn't been stopped, these disasters would have spiraled out of control and caused irreparable harm to Azeroth's world-soul.[6]

On Kezan, the Bilgewater Cartel dug deep enough into the earth that they were able to find a small vein and mine Azeroth's blood. Jastor Gallywix fashioned it into the orb on his cane. He believes there is a possibility that this mining operation bears partial responsibility for the eruption of Mount Kajaro, and it may not have been solely the fault of the Cataclysm.[12]

She has been able to heal her wounds caused by the Cataclysm.[13]

Azeroth chose Magni Bronzebeard, the dwarven king who became one with the earth just before the Shattering, as her speaker. It was Magni who revealed to the people of Azeroth that she was a titan.[14]

The Demon Within roars that Sargeras will claim Azeroth.[15]

Azeroth contacted Magni to tell him about the Primordial Observatory beneath the ocean near the Maelstrom, though as Magni would explain to Brann she did not do so in words but rather in "feelings". He described it as feeling like a sunrise. The reason she directed Magni there was so he would find the seekers: creatures that the titans had infused with the Light to aid the titanic watchers. Azeroth knew the High Priest of the Conclave would protect the seekers and use them in the service of the Light.[16]

When Azeroth tried to send Magni a message, something wasn't right and some force was interfering. Magni requested aid in Sholazar Basin, where he revealed the existence of the Hall of Communion accessed through the Makers' Overlook. The Hall of Communion had been built by the titans to watch over the world-soul, and from within it Magni could hear her clear as diamond. They discovered that what was wrong was that Azeroth was afraid. After fighting off phantoms of Azeroth's nightmares made manifest, which took the form of minions of the Burning Legion and Old Gods, and reactivating Damaged Constructs, Azeroth revealed that Sargeras was on his way to Azeroth and that their destiny lay on Argus, homeworld of the Burning Legion.[17] 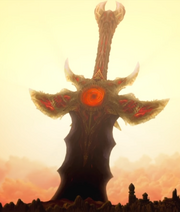 At the climax of the Legion's invasion, Sargeras attempted to destroy Azeroth. Although he was stopped and imprisoned by the Pantheon, he did manage to wound her in Silithus. Like she did when Y'Shaarj was removed, Azeroth began to bleed out of the wound Sargeras inflicted, forming a pool of blood in the area that could be compared to the Well of Eternity.

Aided by the heroes of Azeroth and their powerful artifact weapons, Speaker Magni Bronzebeard was able to stabilize the planet's grievous wound. Azeroth was stable, but the road to healing her fully would require much more than a temporary bandage. The events in Silithus were just the first step in aiding the planet.[18]

Azeroth bid Magni to call for a hero who could lend her help. The Speaker brought the hero to the Chamber of Heart at the heart of the world, where they were given the Heart of Azeroth. The path to restoring Azeroth would consist in gathering Azerite and healing the world-soul through the Heart. In doing so, the Heart would also empower the hero in turn. Magni told the hero to keep the necklace close to them at all times while he continued to search for ways to undo the damage done to Azeroth. He would be able to contact the hero through the necklace if need be.[19]

Eventually, Magni and Brann brought MOTHER, a titanic watcher from Uldir, to the Chamber of Heart so that she could analyze Azeroth and find a way to heal her.[20] With the help of Magni, MOTHER, the Dragon Aspects, Wrathion, and many adventurers, the final Old God, N'Zoth was defeated. The wound, however, still remains.

The Jailer and his servants claim that Death will soon come for the soul of Azeroth.[21][22]

From what little has been gleaned of Azeroth's personality, typically communicated through her Speaker, Magni Bronzebeard, she appears to have the demeanor of a frightened child. She suffers horrific nightmares based around the Old Gods and other threats to her,[17] and pleads Magni to stay with, and speak with her after she was wounded by Sargeras' sword, similar to how a parent would comfort a child.[23] Magni has compared Azeroth's voice to a song. There's beauty in it, even when her message is unclear.[24]

"It's too late. Azeroth will never wake up. He was the Titan's last hope.
...But a bit of his spirit dwells within every hero of Azeroth, every mage who picked up a wand, every warrior who took up a blade, every champion from any world who took root in Azeroth and decided to defend it as their home.
We mortals are all that stands between the Light and oblivion, but so long as this world is our home we're lit from within by the heroic spirit of a dormant Titan."

Since the revelation that Azeroth is, in fact, a titan, certain quotes might have gained new meanings retroactively.

Prince Renathal seems to be aware of Azeroth, and is one of the only non-Eternal One inhabitants of the Shadowlands to possess this knowledge prior to meeting her champions. He even goes as far as suggesting "she has been quite busy of late", possibly implying activity in the eternal conflict between the six powers, or simply her ongoing self-defense against outsiders seeking to exploit her or her home's resources.