For the ruler of the naga, see Queen Azshara. For Azshara prior to the Cataclysm, see Azshara (Classic). For the naga zone in the Broken Isles, see Eye of Azshara.

Azshara is located in northeastern Kalimdor, east of Ashenvale, south of Winterspring, and north of Durotar. It is a beautiful coastal area cloaked in eternal autumn.[1] The trees and other flora are tinged in brilliant oranges and reds, and nearer the coast, great cliffs and sandy beaches line the ocean. The region's hostile inhabitants, which include enraged ghosts, vicious satyr, stalking naga and ferocious wildlife, have been mostly quelled by the arrival of the Bilgewater Cartel Goblins. During the Azshara storyline, the goblins defeat the Spitelash naga and the encroaching night elf forces seeking to stop the goblins exploitation of nature. Following the Siege of Orgrimmar, Tyrande Whisperwind claimed the night elves will allow the goblins to keep Azshara as part of the tentative peace between the Horde and Alliance.

Trade Prince Jastor Gallywix makes his home at the Gallywix Pleasure Palace, while Bilgewater Harbor is considered the capital city of the Horde goblins.

During a battle in Azshara, Cenarius granted his blessing to Huln Highmountain so that his people would forever have his favor. This transformed Huln and his people's horns into the Horns of Eche'ro: their moose-like antlers.[2] Huln went on to battle Tichondrius, who was leading the Legion's forces in Azshara.[3]

[Sarcen Stone] to draw arcane energy away from the Legion's portal at the Well of Eternity, buying time for the rest of the world to fight back. This act cost them their lives when the demons came down on them, and history would not record these unsung heroes.[4]

When the Burning Legion launched their invasion on Kalimdor during the Third War, the demons arrived to Azshara and continued to Ashenvale.[5]

Right after the Third War, Illidan Stormrage and his naga passed through the area, assaulting the local night elven villages and wreaking havoc among the forest creatures, including the furbolgs and wildkin. Local mur'gul's and satyrs also assisted Illidan. Maiev Shadowsong and the Watchers followed Illidan's trail through the area, putting the creatures out of their misery. Illidan's goal was to wreck the night elven harbors on the coast so no one could follow him to the Tomb of Sargeras.[6]

Prior to the Cataclysm, neither the Horde or Alliance sought to use Azshara for much despite it's proximity to Durotar and Ashenvale. The Horde scout, Ag'tor Bloodfist, helped Horde adventurers down the traitorous Magus Rimtori during the Betrayed quest line. The sea giant Demigod Arkkoroc and his sons sought help against the Hydra queen Hetaera. Lastly, the Demon hunter Loramus Thalipedes aided adventurers in battling the Dreadlord Razelikh the Defiler by forging Azsharite weapons.

The area was home to rare

[Enchanted Coral], which the Spitelash were drawn to.[7]

Elementals invaded the area only to be fought by the adventurers of the Alliance and Horde.

Prior to the start of the invasion of Outland, Azshara was invaded by a group of Burning Legion demons led by Highlord Kruul.[8]

The area was also invaded twice by the Scourge in the years leading to the war against the Lich King.[9]

The Shattering radically changed the balance of power in Azshara. The Bilgewater Cartel goblins, the Horde's newest ally, have made their home here, building a city into the cliff side, and destroying the Azshara Crater to make way for a large quarry. To show their loyalty to the Horde, the goblins have reshaped Azshara into a giant Horde symbol.

Having recently gained the mantle of warchief, Garrosh Hellscream is preparing for war to claim all of Kalimdor for the Horde. The goblins of the Bilgewater Cartel, headquartered in Bilgewater Harbor, are playing their part by building war machines, constructing weapons, and establishing a massive naval harbor within sight of Orgrimmar. Meanwhile, the night elves aren't content to sit idly by; they fully intend to challenge this unwelcome occupation in Azshara and hopefully stymie a conflict that would otherwise be carried deep into their forests. Amid all this tension, the Bilgewater Cartel is also out to make a name for itself in true goblin fashion. What is the best way to show solidarity? Reshape the Bay of Storms into a giant Horde symbol! From there, a secret lab, an extensive rocketway, and a "pleasure palace" with its own golf course are just natural leaps in goblin logic. Azshara is now the largest terraforming project on Azeroth - whether it's sculpting the terrain to promote Horde propaganda, moving an entire mountain to pillage the minerals underneath, or slapping the face of the trade prince on a nearby crag, there's no question who wears the pants in Azshara these days.[11]

Kalec is rounding up all of the blue dragonflight, as he fears the death of Malygos will be a sign of weakness and Deathwing will send out agents to assassinate the remaining dragons within the flight. This holds true as the black dragonflight has invaded Azshara to hunt down Azuregos. Kalec and Azuregos help low level Horde players to repel the invasion.

The Burning Legion targeted Azshara as one of their invasion points, especially targeting the rear gates of Orgrimmar.[12] It was successfully defended by the Alliance, Horde and Illidari.

Alliance
From Forest Song in Ashenvale, follow the road east into Azshara. The Alliance outpost Talrendis Point is just over the river.

Horde
From Orgrimmar, go northeast through the Orgrimmar Rear Gate. Alternatively, from Splintertree Post in Ashenvale, travel along the road east into Azshara. The Horde encampment Valormok is against the mountains, north of ruined Haldarr Encampment.

Azshara is located in Northern Kalimdor. It contains the rocketway, a free five station elevated transport which runs round the bay. Rocketway stations are:

There are no instances or battlegrounds in this zone.

In addition to the below flight paths, there is a Rocketway present in the zone that will transport you to another station for free.

Azshara is home to several characters of note. Kalec relocated to Azshara, fearing that Deathwing would send agents to assassinate the rest of the flight. This held true, as the black dragonflight invaded Azshara to hunt down Azuregos. Kalec can be found in Bilgewater Harbor, where he and Azuregos help low-level Horde players to repel the invasion. At the Arcane Pinnacle, Archmage Xylem's apprentices try to pass his trials. Ogtinc assists experienced hunters and priests.

When first arriving in Azshara, you may want to take the Rocketway and tour the zone first. In addition to earning the

[Joy Ride] achievement along the way, you will gain a good chunk of free discovery experience, be able to pick up the flight paths and get to see some magnificent scenery. Of course, goblin technology has been known to break down from time to time... 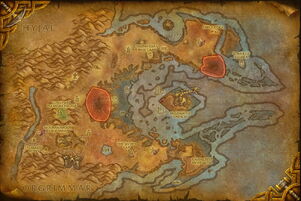 A shattered stretch of coastline on Kalimdor's northeast, Azshara was once the greatest night elf metropolis. The city fell millennia ago in the War of the Ancients, but a few ragged buildings perch on the cliffs overlooking similar ruins among the coral.[14] Much of the city of Azshara fell into the ocean.[15]

Before the Great Sundering, this shattered stretch of coast along Kalimdor's northern border was once a part of the night elven capital of Zin-Azshari; then came the demons' expulsion from the world. The land was rent asunder and the sea thundered in, making the region a watery grave and leaving nothing but ruins of the once great city. The night elves who survived named this region — once glorious, now nothing but a shattered relic — Azshara, after their queen who was driven mad by demonic influence. Since that time, this place of rocky islands, jagged cliffs, and coral-choked seas has given birth to many tales.

Some night elves suggest that not all of the demons were banished, still lurking beneath the glittering waters of the Coral Sea and waiting to strike back. Others claim that Queen Azshara was not drowned, but transformed into a hideous aquatic thing who will someday lead her accursed followers to retake the surface world. A few whisper that the Dark Portal that first brought the demons to Azeroth remains and rests under the sea waiting for someone to reopen it. Still others assert that the ancient Sundering awakened something that dwelled in the deepest part of the ocean, something that will eventually burst forth in a tidal wave of destruction. Whatever the truth, night elves agree that the region is cursed.[16]

A river separates the primordial wood from what land there is. The terrain beyond the river is little more than a strip of green above fragmented cliffs that rise high over a stretch of ivory beach. The waves of the shallow Coral Sea sweep against this beach, and islands — little more than spires of jagged rock — jut from the water. A twisted expanse of reef creates a labyrinth of coral beneath the ocean surface, making sea travel here virtually impossible.

The night elves consider the place cursed, and most other races find the constant storms unpleasant. There is but a single habitation in Azshara, the orc trading village of Grim Ulang, its residents telling of creatures flitting about the ruins of Zin-Azshari further along the cliffs, and murlocs and naga swimming in the Coral Sea. Bands of undead have appeared along the beach and at the fringes of the Ashenvale Forest. As well, the dark chants of demon cultists have echoed along the cliffs in counterpoint to the thunder of storms. Steady rumors and sightings have led to frequent night elf patrols and an increased martial presence in Grim Ulang.[16]