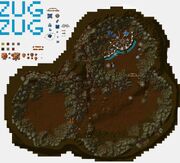 Satellite map of one of many iterations.

Azshara Crater was a planned battleground likely located in the Forlorn Ridge in southern Azshara, and was intended to work in a similar fashion to as Alterac Valley. Though never implemented, the entrances were placed within the Azshara zone; the Alliance entrance was on the south side of Forlorn Ridge and the Horde one on the northern side. These caves (along with the entire ridge) were removed in Cataclysm, though the terrain for the battleground itself still exists in the game files.

Mention of Azshara Crater happened as early as patch 1.3.0 (released March 7, 2005), but it never appeared in a playable state. A few official mentions occurred in early[1] and late 2007,[2] but there were no updates after this.

At BlizzCon 2007, it was stated during a Q&A session that they had not decided if the Azshara Crater battlefield would be added; the developers felt that balancing Alterac Valley was a higher priority. In later interviews, Jeff Kaplan confirmed that Azshara Crater would not be included in the Wrath of the Lich King expansion, although Blizzard acknowledged that they might return to work on further developing the battleground. The future of Azshara Crater looked even grimmer at BlizzCon 2009, when it was revealed that in the wake of the Cataclysm, the Bilgewater goblins had strip mined the Forlorn Ridge into oblivion.[3]

At BlizzCon 2011, Blizzard stated that Azshara Crater was one of three battlegrounds under consideration for the Mists of Pandaria expansion pack, with a DOTA-style gameplay. In the press tour the following March, they said out of the three potential battlegrounds they ended up picking two, with Azshara Crater being the one left out.[4]