Baelgun Flamebeard was a dwarf who led the remnants of Muradin Bronzebeard's expedition in Northrend after Muradin was lost in the wastes. He was eventually killed by Arthas Menethil and Anub'arak in the depths of Azjol-Nerub.

Second in command of the dwarven expedition into Northrend, Baelgun served under the leadership of Muradin Bronzebeard. When Mal'Ganis attacked the camp, Baelgun organized the dwarves. When Muradin was "killed" by Frostmourne, Baelgun took command of the remaining dwarves and led them into the ruined city of Azjol-Nerub below Icecrown Glacier. When Illidan Stormrage used the Eye of Sargeras in an attempt to destroy the Frozen Throne, the tunnels of Azjol-Nerub were shaken by earthquakes which freed long-forgotten monstrosities called the faceless ones.

Driven out of the lower tunnels by their malicious attacks, Baelgun and his people sealed the entrance to the Inner Kingdom, vowing to keep the horrid creatures locked within. When Prince Arthas entered Azjol-Nerub with Anub'arak, Baelgun warned him that there was an ancient evil lurking within the Inner Kingdom. Arthas, however, paid him little heed and killed the dwarf before proceeding into the Inner Kingdom.[1]

Baelgun's soul was freed from Frostmourne's grasp when the blade was destroyed several years later. However, his soul now roamed Icecrown Citadel, forced to repeat the moment of his demise for eternity. Frost death knights seeking to reforge the shards of Frostmourne into two new swords were forced to destroy Baelgun's spirit before they were able to claim the shard that he was guarding.[2]

Aggro
Did that traitor of a prince send you? So be it, I'll show no mercy!
During fight
You an' that prince of yours are gonna pay for what he did to ole' Muradin!
Death
What... what have I done? 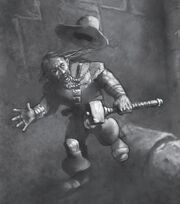 Baelgun in Lands of Mystery.

Baelgun and many of his dwarves survived, and Brann visited him at Doorward when he came to Northrend.[3]

This dwarven scout is short and stocky, even for one of his race. His flame-red beard looks like it would brush the top of his boots when loose, though a double braid hangs only to his knees. He scowls beneath his thick red eyebrows, and his battered nose is all but lost between brow and beard. In battle Baelgun is a fierce and wily opponent, leaping into the fray and swinging from side to side, deliberately using his braids to distract opponents from his whirling hammer. Baelgun is smart enough to retreat when the odds turn against him, and he is not above attacking from behind — though with his bulk and coloring he is not built for stealth. Since Muradin Bronzebeard's death Baelgun was the leader of the Bronzebeard Expedition. He and the other survivors are camped near the entrance to Azjol-Nerub and guard it to ensure that nothing escapes from within.[3]